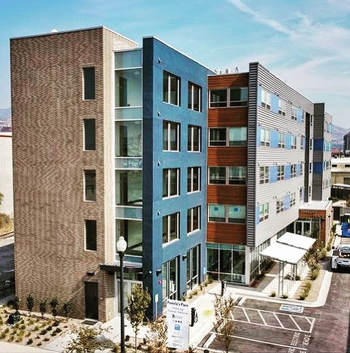 In September 2020, the Housing Authority of Salt Lake City (HASLC) opened a 100-unit permanent supportive housing development for people experiencing homelessness or housing instability. Named after Pamela Atkinson, a longtime advocate for the city’s homeless population, Pamela’s Place follows a Housing First model with very few prerequisites for residents. Most of the apartments specifically target residents with disabilities. Pamela’s Place has a full-time clinic onsite serving residents and the broader community. The project exemplifies the longstanding commitment of the city and state to providing permanent housing for people experiencing homelessness, an effort that has taken on renewed importance with the housing crisis brought on by the COVID-19 pandemic.

Background on Housing First in Utah 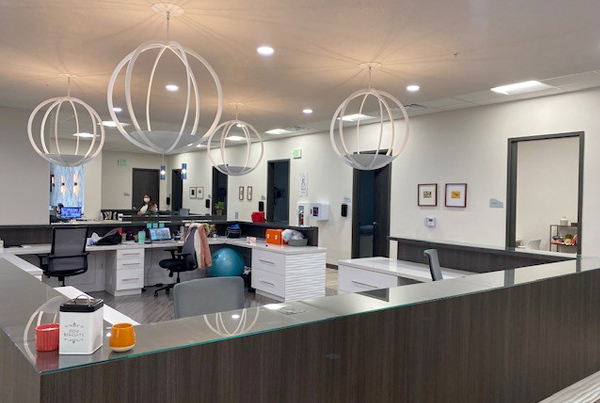 Despite this initial progress, the number of Utahns experiencing homelessness has since risen sharply. In 2022, an estimated 3,500 state residents were experiencing homelessness, an almost 25 percent increase since 2018. During this period, the number of unsheltered Utahns doubled. The increase in homelessness rates has been attributed primarily to a rapid increase in housing prices, which the COVID-19 pandemic exacerbated. While recognizing the ever-growing need for housing for people experiencing homelessness, HASLC also realized the importance of providing support services for this population. After reaching out to several community partners, the public housing agency decided to partner with Sacred Circle Healthcare, a service organization operated by the Confederated Tribes of the Goshute Reservation, to construct a permanent supportive housing project incorporating a community clinic. This arrangement gave Sacred Circle space for a needed clinic, and HASLC gained onsite support staff who would act as case managers and service providers for residents. HASLC obtained land from the city to build Pamela’s Place in the same formerly industrial section of downtown Salt Lake City where it had opened its first permanent supportive housing project 15 years earlier. The nearly $14 million project was funded primarily through low-income housing tax credit equity, although it received additional support from other public and private sources, including the Pamela Atkinson Homeless Trust Fund, a statewide charitable fund that supports services for people experiencing homelessness. 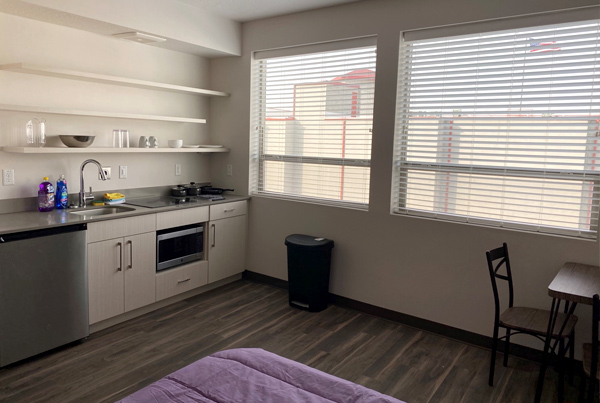 Pamela’s Place consists of 100 studio apartments. Ninety-five of the units are reserved for those with disabilities, 10 of which are specifically designed to standards accommodating residents with physical mobility impairments. Although not all of these residents were chronically homeless before moving to Pamela’s Place, few, if any, had stable housing. The building has gathering areas as well as a community kitchen, garden, and spaces for pet care. The site’s central location near downtown and a light rail station allows residents to access employment, retail, services, and other destinations without a car.

HASLC designed Pamela’s Place to be its first ever net-zero energy housing development. Solar panels on the roof produce more than enough energy to power the residences, and a solar battery allows the energy to be stored for later use. The development has energy-efficient appliances, fixtures, and windows, and the tight building envelope ensures that little heated or cooled air escapes, which also saves energy. Windows in the long common hallway admit extensive natural light. Although the state agency that allocates tax credits required many of these energy-efficient design features, Jonathan Olson, HASLC’s vice president for development, explains that HASLC is committed to adopting energy-efficient development practices, which, in addition to their societal benefits, ultimately save money. “Although it is a bit of an investment up front,” Olson says, “you recoup those costs relatively quickly on the operating side.” For example, the building’s high-efficiency heat pumps cost approximately 12 to 15 percent more than a conventional heating and air conditioning unit but are 30 to 50 percent more efficient.

Serving Those in Need

Sacred Circle’s healthcare clinic serves residents 24 hours a day. The facility offers a range of physical and mental health services, including access to a psychiatrist. Having a full-time clinic onsite allows residents to be more proactive about their healthcare needs. Britnee Dabb, HASLC’s deputy director, says that the clinic has helped residents avoid emergency room visits. On the nonmedical side, clinician staff serve as case managers for residents, assisting them with daily needs such as arranging appointments or coordinating transportation. Staff also help residents with various life skills such as applying for jobs or learning to type.

For many residents, Pamela’s Place is about more than just shelter and services — it is about people who have not had a permanent address in decades gaining a sense of dignity because they now have a place to call home. Residents can finally feel as though they are part of a community. “They are proud of where they live,” says Dabb, describing the residents when they clean the public corridors or prepare for visitors. Some have even offered tours to new residents without being asked. The state remains committed to reducing homelessness rates, as described in the 2020–2024 Utah Consolidated Plan, and HASLC has other similar developments in the works. HASLC also plans to continue partnering with organizations such as Sacred Circle Healthcare to incorporate support services into future projects.