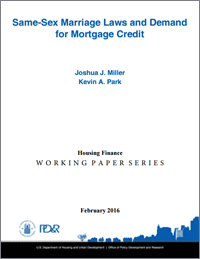 Marriage is not only a profession of commitment but also a legal contract that is associated with a variety of rights, privileges, and obligations. Some of these benefits reduce the cost of homeownership and therefore may increase the demand for mortgage credit. Same-sex couples in the United States were barred from receiving many of these benefits until the Massachusetts Supreme Judicial Court ruled in 2004 that it was unconstitutional to ban same-sex marriage. Over the next decade, another 35 states and the District of Columbia would implement marriage equality. Ultimately, the United States Supreme Court extended the right-to-marry to all same-sex couples in Obergefell v. Hodges (2015).

Although same-sex couples constitute a small share of all households and mortgage applicants (approximately two percent), the variation in same-sex marriage laws across states prior to the 2015 Supreme Court ruling creates a natural experiment that can be used to examine the effect of the availability of marriage on the demand for mortgage credit.

Economists in the Office of Policy Development and Research (PD&R) recently analyzed that variation in the timing and method of implementation of state same-sex marriage laws using data collected under the Home Mortgage Disclosure Act (HMDA) to explore the effect of state same-sex marriage laws on the number of mortgage applications. The study appears in PD&R’s Housing Finance Working Paper series and its findings are summarized below.

The authors also examine the effect of another Supreme Court decision, United States v. Windsor (2013), which overturned Section 3 of the Defense of Marriage Act (DOMA). Section 3 of the Defense of Marriage Act (DOMA) limited the terms “marriage” and “spouse” to include only persons of the opposite sex for the purposes of federal regulations. If a veteran obtained a loan with anyone other than his or her opposite-sex spouse, VA could only guarantee the veteran’s portion of the loan. After the decision the VA was allowed to review applications for mortgage insurance submitted by married same-sex couples, but only in states that recognized same-sex marriage. The expansion of this federal benefit to married same-sex couples further increased the number of same-sex home purchase mortgage applications. In particular, applications for mortgages insured by the Veterans Administration (VA), which was closely governed by the federal definition of marriage, rose 31 percent after United States v. Windsor in states that had implemented same-sex marriage.

The analysis provides evidence that expanding the opportunity to marry with its related benefits, is associated with an increase in the demand for mortgage credit and, presumably, homeownership. It is likely that the 2015 general extension the right-to-marry to same-sex couples throughout the United States will result in further increases in same-sex mortgage applications. Because same-sex households constitute a small share of the market, the impact on the overall volume of market applications will not be large. However, it is clear that marriage equality might not only have broadened access to marriage but also homeownership.