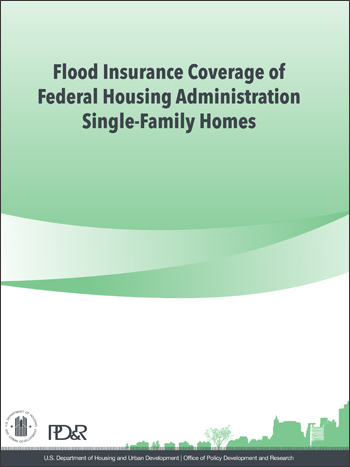 Extreme weather events such as storms and hurricanes have become more frequent in the United States, resulting in more than $1 trillion in damage over the past 40 years. Many insurance companies have removed flood insurance provisions from standard homeowner’s insurance policies, resulting in the rise of separate high-cost flood insurance policies. To protect families living in areas prone to flooding, the federal government established the National Flood Insurance Program (NFIP) in 1968, which designated Special Flood Hazard Areas (SFHAs), and passed the Flood Disaster Protection Act of 1973, which established the flood insurance purchase mandate for mortgage loans in those areas that originated from a federally backed or regulated lender. In March 2020, HUD initiated a study ― Flood Insurance Coverage of Federal Housing Administration Single-Family Homes ― to evaluate the flood risk exposure facing single-family homes insured by the Federal Housing Administration (FHA) and determine FHA homeowners’ compliance with the flood insurance purchase mandate from 2011 to 2019 in North Carolina and Florida. Beyond an initial check of a property’s flood risk and flood insurance status, HUD does not monitor long-run compliance, so this study fills a critical knowledge gap. This research also examines the relationship among flood insurance coverage and premiums, flood insurance claims, and loan performance, allowing HUD to examine the potential effects of increasing flood risks on its portfolio.

The first objective of this study was to determine the number of FHA-insured homes in SFHAs. With NFIP collaboration, HUD provided the researchers with data on 713,090 FHA-insured properties in Florida and 262,558 FHA-insured properties in North Carolina with mortgage insurance endorsement dates after January 1, 2011. Using ArcGIS software, researchers matched parcel and building information to each property based on the corresponding latitude and longitude coordinates. Researchers then used those coordinates to determine which parcels and buildings overlapped with SFHAs. Some properties had inaccurate coordinates, so three estimates accounted for these errors. Under the minimum or conservative estimate, the team designated properties with inaccurate coordinates as outside SFHAs, but under the maximum estimate, the team designated properties with inaccurate coordinates as inside SFHAs based on their ZIP Code. The moderate estimate deems properties inside SFHAs if their parcels or building footprints intersect with SFHAs. The research team also examined the number of single-family FHA properties that are outside but near SFHAs (within 600 meters). Properties in these areas are still likely to experience high flood risk even though they are exempt from the flood insurance mandate.

The researchers’ second objective was to examine whether the homes in SFHAs complied with the flood insurance mandate. To do so, this study merged three datasets for the first time: the FHA-insured single-family property data, the NFIP flood insurance policy data, and the NFIP flood insurance claims data. If a property fell within an SFHA in 2019, the researchers assumed that this was also the case for all prior years of the study. If a flood insurance policy was active for any amount of time in a given year, then researchers deemed it active for that year. The team assumed a claim was valid if the date of loss fell within the start and end date of the corresponding policy. The researchers also used the merged dataset to fulfill the third objective: evaluating the relationship between flood insurance coverage and premiums, claims against NFIP, and loan performance. A longitudinal data file and cross-tabulations showed these relationships for the years 2011 to 2019. Home loan default rates served as a proxy for loan performance. For each year, the study team indicated the claim rate for FHA-insured properties that had a flood insurance policy. Finally, a logistic regression model enabled the research team to determine the impact of a claim or change in policy premium on loan performance.

This study determined that the number of FHA-insured properties in high-risk areas increased in both states during the study period, as did the number of FHA-insured properties with flood insurance inside and outside SFHAs. Although more than half of the FHA-insured mortgages in both states are inside or near SFHAs, many homeowners still lack flood insurance coverage, even if it is mandated. The study’s results emphasized the need for HUD to undertake regular audits of compliance with the flood insurance mandate. Future research could expand the analysis to more states to determine wider compliance trends. Although this study is limited in determining the actual number of properties that are not in compliance, additional research could focus on property improvements, SFHA boundary changes, and other factors that influence whether a homeowner purchases flood insurance. The researchers also determined that flood insurance claims for FHA-insured single-family homes are associated with increased odds of mortgage default, with HUD liable for losses. This study represents a vital first step in understanding the risk to the FHA portfolio.