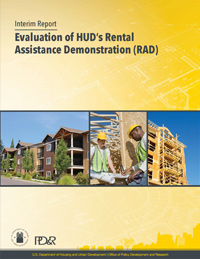 Congress authorized the Rental Assistance Demonstration (RAD)in 2012 to stem the potential loss of public housing and other subsidized housing units because of the growing backlog of unfunded capital needs. RAD is a voluntary program that allows public housing agencies (PHAs) to convert public housing properties to project-based Section 8 contracts — either project-based vouchers or project-based rental assistance. RAD is aimed at providing PHAs with a more predictable long-term annual funding stream by converting these properties to the Section 8 program. This should, in turn, allow PHAs to leverage external sources of capital to pay for rehabilitation costs or create capital reserves to ensure that a property remains financially and physically viable. HUD has contracted for a 5-year evaluation of RAD to determine whether this novel approach to improving assisted housing is addressing capital needs, whether it is physically and financially stabilizing properties, and how the program affects tenants living in converting properties.

The report describes the success properties have had raising funds for RAD conversions. By October 2015, 185 projects had converted 19,255 public housing units to project-based Section 8 contracts. These projects raised $2.2 billion of funding from external sources on top of $250 million from internal public housing resources for a total leverage ratio of roughly 9:1.

The ways in which RAD is being used vary considerably. Of the 185 projects that had closed, 62.7 percent will pursue some level of rehabilitation, and another 18.9 percent will pursue new construction. The remaining 18.4 percent do not plan to do major capital investment upon conversion.

To see whether certain types of projects are more likely to use RAD, the report compares RAD-converting properties with nonparticipating properties.

Researchers surveyed both participating and nonparticipating PHAs From these interviews, we learned the following:

The report presents four case studies of actual RAD projects and compares their project financing plans to hypothetical alternatives that attempt to achieve the same redevelopment scope without RAD. The case studies examine both the development budget and the long-term operating pro forma in detail. The analysis illustrates the significant promise that RAD offers:

Summary, Progress and Next Steps

The interim report demonstrates that the RAD program has been successfully applied to a range of existing public housing properties nationwide, and PHAs have taken advantage of outside financing sources to meet their growing need for capital improvements. Participating PHAs point to the program’s ability to leverage funding that can be used to improve and preserve public housing units. PHAs that chose not to participate in RAD commonly cited concerns about debt financing, a lack of projects in their portfolios with capital needs, and limited staff capacity.

The interim report analyzed data through October 2015. Since then, the RAD program has continued to convert public housing units. As of September 2016, 359 projects have converted 39,042 public housing units through RAD. The final report, expected in December 2018, will offer a comprehensive assessment of RAD’s impact on physical and financial outcomes for participating properties as well as an analysis of the effects of RAD conversion on tenants.