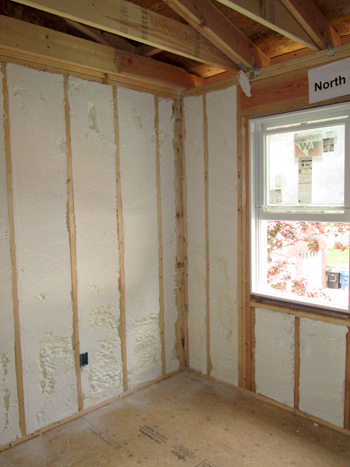 Wall insulated with spray foam before attic insulation is installed. Note that the stud bays are completely filled, including around the electrical outlet (lower left).

In this series, PD&R staff provide practical information on how homeowners can improve or maintain their homes. This article, written by former PD&R Senior Advisor for Disaster Response Dana Bres, discusses Dana’s efforts to improve energy efficiency in his home.

Like many of you, I live in an older home. Built in 1941, my Cape Cod in northern Virginia reflected the consumer priorities and technical capabilities of the time. Energy was cheap, and energy efficiency was expensive. As a result, my home was built with little consideration for conservation or, truth be told, comfort. The double-hung, single-pane wooden windows were the best available at the time; back then, storm windows were used to protect the operable windows from the weather. The original walls consisted of uninsulated brick, concrete block, and plaster. The attic had modest amounts of insulation, largely old fiberglass and cellulose, and the basement had newer fiberglass insulation in the ceiling. That the basement ceiling was insulated suggested the former owners were a bit unclear on installing insulation, because both the basement and first floor were conditioned; insulation is not normally installed in those cases because of the low potential for energy savings.

When we bought our home in 1992, it was largely in its original condition. The furnace had been replaced at least once, and air conditioning had been added along the way. Fortunately, the home originally had a forced air heating system rather than radiators, which allowed the previous owners to add air conditioning with less effort. Installing ducts is fairly invasive; ductwork takes significant space from the home’s living areas and requires extensive construction and finishing of new walls after installing the ducts. Some installations may use small ducts that fit inside walls, but these smaller ducts often will be noisy because air moves through them at much higher velocity.

My energy journey involved three broad strategies: easy-to-implement actions, the replacement of inefficient home equipment, and structural changes. I was motivated by the prospect of improved comfort and reduced costs as well as a sense of obligation to take actions at home similar to those for which I have advocated throughout my career.

The first strategy involved replacing light bulbs and installing weather stripping and a programmable thermostat. These tasks were easily implemented and comparatively inexpensive. At the time, the alternative to conventional incandescent bulbs was the compact fluorescent lamp (CFL). Although CFLs cost roughly $8 to $10 per bulb at the time, they used about 15 percent of the power of incandescent bulbs, potentially paying for themselves through energy savings. Weather stripping was a tedious task requiring many hours and multiple trips to the hardware store. The programmable thermostat allowed us to save energy on heating and cooling our home while we were at work during the day. Although installing the thermostat did involve connecting wires, the instructions were clear, and I was ultimately successful.

The second strategy targeted more substantive replacement of the home’s components and appliances, such as air conditioners, furnaces, water heaters, and refrigerators. When these components wear out and require replacement, it presents an opportunity to affordably improve overall energy efficiency. The good news is that market pressure and government regulations have made modern furnaces and air conditioners far more efficient than those available in 1992. Assuming these components have a service life of 20 years, the air conditioner, furnace, and water heater of a home built in 1970 may have been replaced two or three times, each replacement more efficient than the last. Homeowners who are already committed to replacing an appliance at the end of its useful life should consider purchasing a higher-efficiency model. A side benefit of the more energy-efficient air conditioners is that they are often much quieter than less efficient units.

As homeowners are generally reluctant to ask how much more they must pay for energy-efficient appliances, it may be more useful to reframe the question as, “What are the energy savings available with a higher-efficiency appliance?” In addition, newer appliances — in particular, furnaces and water heaters —often are smaller than the older models, so upgrading these components may present an opportunity to reclaim some storage space in the basement or utility room. In 2010, I installed a new 98 percent efficient furnace and a high-efficiency (18 SEER) air conditioner. The old furnace was approximately 65 percent efficient, and the old air conditioner was probably 10 or 11 SEER. I also replaced my old, 65 percent efficient water heater with a 95 percent efficient tankless unit. My energy savings were dramatic, particularly the drop in gas consumption after installing the tankless water heater.

Two additions to the home enclosed the old, uninsulated walls within new, well-insulated walls. I used 2x6s instead of 2x4s to get two more inches for insulation. For the most recent project we insulated with spray foam, which both air-sealed the walls and offered higher levels of insulation. As part of these additions, we replaced the old windows with high-performance, double-glazed windows. Just like appliances, more energy-efficient windows have a relatively low additional cost, particularly when the cost of installation is included.

So, what were the results of these interventions? Since 2004, when I began tracking the cost of energy use in my home in terms of dollars per square foot (sf) per year, my electricity costs dropped slightly, from $0.54/sf/year between 2006 and 2009 to $0.47/sf/year between 2017 and 2020, with the costs not adjusted for inflation. During the same periods, my gas costs dropped from $0.59/sf/year to $0.21/sf/year. The changes in my home between those two periods included replacing a gas furnace, installing a gas tankless water heater, constructing an addition that increased the home’s size by about 50 percent, including an electric heat pump for the new space.

If I were starting over, I would have installed a high-efficiency gas furnace and a high SEER air conditioner instead of the electric heat pump, because the exceptionally low cost of natural gas would have resulted in greater savings. The other choices have performed superbly, and I wouldn’t hesitate to repeat them.

As you consider improving the energy efficiency of your home, you should:

As Berkshire Hathaway chief executive officer Warren Buffet has suggested, you have to be willing to “eat your own cooking.”

For homes in which the water heater is in the living space, a tankless unit can create space for a pantry or linen closet.

SEER, or Seasonal Energy Efficiency Ratio, is the cooling output of an air conditioner divided by the energy it consumes. SEER is similar to the miles per gallon efficiency measure for a car, with higher SEERs being more efficient.

We converted a screened porch to a finished room with a closet above in 2001 (enclosing an exterior wall and replacing all the original windows), replaced the furnace and water heater in 2010, built a two-story addition (enclosing the entire back wall and installing a heat pump for the new space) from 2014 to 2015, and installed rooftop solar panels in 2016.

Although energy use typically is expressed as the amount of energy expended per square foot (often British thermal units per square foot per year), I use the cost in U.S. dollars instead.