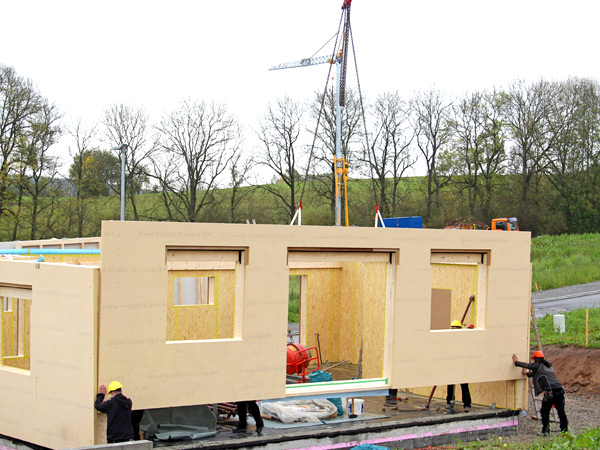 Although prefabricated housing has not been widely adopted, it has been shown to reduce overall construction costs.

California, and the Bay Area in particular, is in the midst of a well-documented increase in housing costs and decline in affordability. Many factors contribute to the high cost of Bay Area housing, including high construction and labor costs. In response, some entrepreneurs see an opportunity to market new, cost-saving strategies for providing housing. In November, 2018, The Terner Center for Housing Innovation at the University of California, Berkley, in conjunction with Fannie Mae, hosted the InnovateHousing 2018 conference to consider solutions to increase housing supply and affordability. One panel consisted of representatives from Bay Area companies and included Rick Holliday, chief executive officer of Factory_OS; Sam Ruben, vice president of compliance and sustainability for Mighty Buildings; and Steve Glenn, chief executive officer of Plant Prefab. The panel, moderated by Cory Weinberg, reporter for The Information, covered technological and business strategies to reduce the cost and construction time for new housing. During the panel, two main themes emerged: advances in material science and design processes are reducing costs, and new thinking about business models for manufactured housing is encouraging resilience against economic downturns. Although they are still in the early stages, these companies hope that demonstrated success will enable them to scale up and make a bigger impact in addressing housing affordability.

One remarkable aspect of housing production, according to Ruben, is how little innovation it has seen over the past century. Glenn further notes that a lack of market pressure has encouraged U.S. manufacturers to stick to traditional methods. By contrast, countries with long histories of high housing costs have adopted innovative building technologies more readily than the United States. The severity of the housing crisis in certain U.S. markets, however, is providing these entrepreneurs with the chance to bet on new approaches.

An important area of innovation is in process improvements. According to Holliday, customers need the ability to move quickly from site and vision to scenarios and pricing. In many ways, Factory_OS seems like an ordinary housing manufacturer: by building housing in a factory and then shipping it for final assembly onsite, production can be made more predictable and efficient, reducing overall construction costs. But Factory_OS is using technology to achieve efficiencies not previously possible. By integrating software so that the downstream costs of design changes can be calculated quickly, Factory_OS is providing clarity to its clients and streamlining processes, saving time and money. A quick turnaround from concept to pricing also matches one of traditional construction’s historic advantages over manufactured housing — the ease of customized design — further enhancing the potential market appeal of manufactured housing.

Other technologies more clearly depart from traditional construction. Mighty Building, for example, is combining 3D printing technology with advances in material science. According to Ruben, a proprietary polymer allows Mighty Building to produce architectural forms not currently possible with other 3D printing techniques. The resulting product is more economical than traditional construction, and has great appeal to consumers.

Technological innovations, however, are only half the story, and the idea that prefabricated housing can reduce costs is not new. Despite the potential cost advantages of manufactured housing, the challenges involved in navigating the boom-and-bust cycle of the housing market have constrained its adoption on a broad scale. For example, says Rubin, a factory is a significant fixed capital investment, and downturns in housing encourage owners to retool to avoid idling their assets. Often, factories will not necessarily revert to producing housing even when the market picks up, because taking time to shift production imposes its own costs; this effectively suppresses manufactured housing development before it achieves economies of scale.

A similar dynamic plagues the labor component of housing production. According to Glenn, when housing production declines, construction workers seek work in other fields, and not all of them go back to building housing when demand returns. The Great Recession, which hit the housing market particularly hard, precipitated an exodus of skilled labor from the construction industry, the effects of which have lingered in the form of significant labor shortages and the resulting high labor costs. Holliday estimates that in the San Francisco area, the labor supply in the construction industry is 30 percent lower than it was a decade ago. This decline means that techniques with lower labor requirements now have a distinct advantage over traditional construction methods. Manufactured housing allows builders to produce housing in areas with lower labor costs that then can be shipped to and sold in high-cost markets.

Together, these realities are encouraging housing manufacturers to adopt business models that are less complicated, nimbler, and focused on quality. Factory_OS, for example, targets market segments that tend to be more resilient against volatile economic cycles, including supportive, affordable, and student housing. Rubin says Mighty Building is focusing on accessory dwelling units. Going after smaller-scale projects can also be part of the strategy, as modestly sized projects tend to rely on mom-and-pop contractors that offer a wide range of quality. Each of these companies is confident in their ability to deliver units competitively and at a significantly lower cost than traditional construction, with projected reductions of 20 to 30 percent at Plant Prefab and 50 percent at Factory_OS. “Our big challenge is scaling up,” says Glenn, and history suggests that challenges lie ahead for each of these companies. However, with historically high housing prices, lessons learned from past experiences, and new cost-saving technologies, these businesses may be paving the way toward a new era of mass-produced housing.