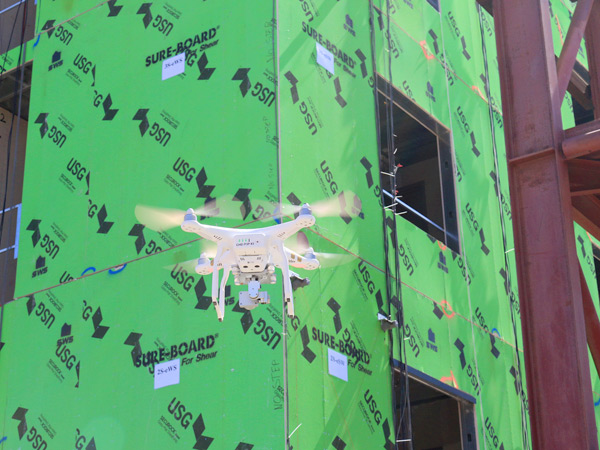 UCSD researchers used drones to conduct a rapid and detailed inspection of an entire building during and after testing, eliminating the need for ladders or boom trucks. The drone also keeps inspectors a safe distance from the building in cases where the building is seriously damaged.

As part of the Research Partnerships program, HUD supported this study to learn how buildings with cold-formed, often called light-gauge, steel framing performed during earthquakes. The University of California, San Diego (UCSD) led a project to build and test a six-story building on the world’s largest outdoor seismic shake table. The study’s findings will help researchers better understand the seismic performance of this type of construction and allow engineers to better incorporate safety, performance and affordability into their designs. Cold-formed steel is readily available and lends itself to labor-saving strategies, such as the offsite fabrication of wall panels, that speed construction and improve building quality and affordability. Cold-formed steel is also easily recycled, resulting in a more sustainable construction material. 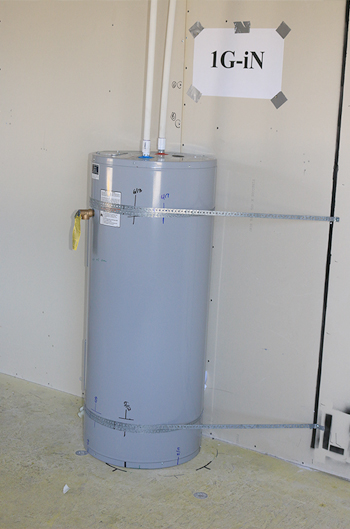 To prevent toppling, this water heater was strapped to the wall. However, the building movement caused it to shift about three inches to the right, as shown by the marks on the floor.

The building was subjected to earthquake motions of increasing intensity up to the maximum credible event, or 150 percent of the intensity of the 1994 Northridge earthquake. Following the seismic testing, fire researchers from Worcester Polytechnic Institute in Worcester, Massachusetts, tested the building’s performance during a post-earthquake fire.

The test was performed on the shake table at UCSD (supported by the National Science Foundation) and the movement replicated the ground motion of the Northridge earthquake. The building was constructed directly on the shake table and was designed and built to meet current California building codes. After each test, researchers inspected the building and documented any damage. The building was heavily instrumented with video cameras, global positioning system sensors, accelerometers, and displacement gauges to measure building movement at multiple locations on each floor. Drones with cameras were used to observe the tests and inspect the building.

Because the building provided a rare test platform, other project partners used the opportunity to conduct supplementary tests of seismic safety valves for natural gas appliances, tie-downs for water heaters and kitchen appliances, and the performance of doors. 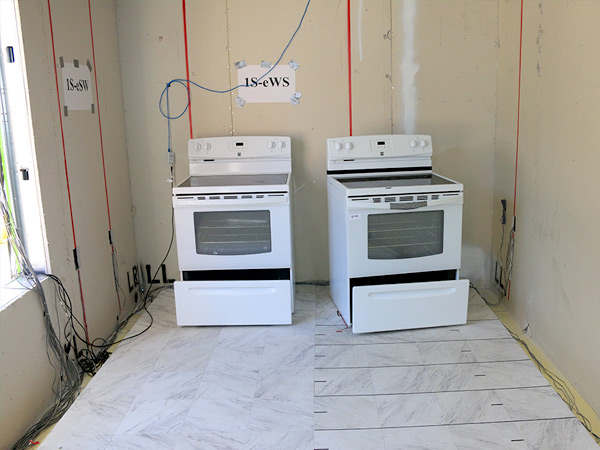 Initial findings show that although current steel framing designs perform well, opportunities exist to refine designs to improve affordability and performance. Demonstrating that cold-formed steel is a viable construction material will help policymakers refine building codes to recognize the current performance of cold-formed steel framing and encourage the development of design strategies that allow cold-formed steel to achieve structural performance comparable with that of other materials. Having additional choices in materials allows builders to respond to costs and shortages and helps guide investment decisions that result in the production of affordable housing and other structures in the community.

As building codes become more rigorous, builders must adapt their design and material choices. The need to improve affordability or performance often drives innovation. Although building codes may demand the same performance, some materials may have design requirements that result in increased costs. This research was a unique opportunity for a more holistic examination of a building material’s seismic performance. The HUD-supported tests by UCSD demonstrate that mid-rise construction using cold-formed steel is a viable strategy in high-seismic areas.

HUD funded about 15 percent of the total cost of the research, with the remainder from the university and industry partners.