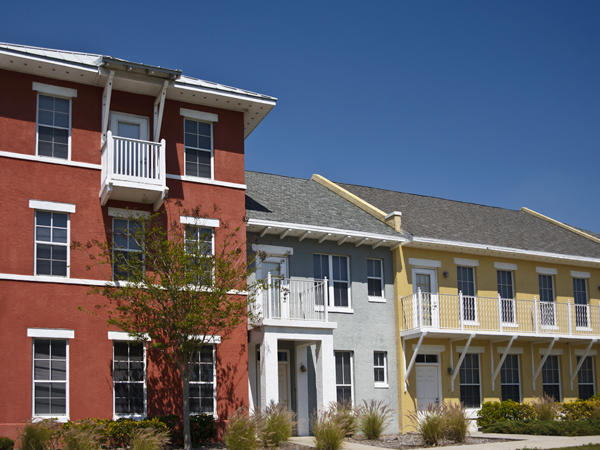 Public spending forms the basis of affordable housing production or preservation. When public funds are unavailable or prioritized elsewhere, however, nongovernmental entities can fill this financing gap with private investment funds. During its 2021 Housing Opportunity Conference, the Urban Land Institute (ULI) held a webinar titled “Leveraging Investor-Funded Housing Models to Meet Broader Community Housing Needs.” In this virtual event, ULI global chief operating officer Ed Walter led three speakers in a discussion of how their firms are using private investment dollars in the affordable housing sector. Two of the speakers represented traditional investment entities, in which institutional investors contribute capital and receive a return, whereas the third discussed a neighborhood real estate investment trust, a local trust in which individuals can purchase shares.

Following his opening remarks, Walter introduced panelist Anne McCulloch, president and chief executive of the Housing Partnership Equity Trust (HPET). HPET was founded in 2012 by the Housing Partnership Network, a collaborative of 100 affordable housing and community development nonprofits, and owns 14 properties in 7 states. As a social purpose real estate investment trust (REIT), HPET uses capital contributed by institutional investors to obtain, improve, and preserve existing multifamily properties that are naturally occurring and affordable in markets that are becoming more expensive. The trust seeks out unsubsidized developments in neighborhoods that have the amenities needed for family success such as Head Start programs, job centers, retailers, and public transit. Developments meeting these criteria tend to be garden-style apartments built in the 1980s and located in inner-ring suburbs. To lower the long-term operating costs of the site and fulfill their commitment to residents, HPET’s first acts after acquiring a new development often involve addressing deferred maintenance issues that previous owners may have neglected and making sustainability-related “green” upgrades.

HPET operates much like the enterprise represented by another speaker: Daryl Carter, chairman and chief executive officer of Avanath Capital Management. Founded by Carter in 2007, Avanath Capital Management is one of the nation’s largest owner-operators of affordable apartment communities, with 88 properties in 13 states. Like HPET, Avanath Capital Management uses the capital of institutional investors to purchase and redevelop affordable multifamily housing, although the two entities’ strategies differ in multiple ways. Avanath primarily pursues housing that was built by or remains subject to government affordability programs in markets with job growth and large gaps between affordable rents and market rents; for example, in coastal areas or cities such as Chicago or Austin. Carter estimated that between 15 and 20 percent of Avanath Capital’s stock consists of naturally occurring affordable housing rather than developments built using programs such as the Low-Income Housing Tax Credit Program. Avanath Capital seeks out neighborhoods underserved by institutional capital that lack amenities such as retail, banks, and healthcare institutions; it then attracts these community necessities to the area by purchasing and investing in local affordable housing and providing those developments with supportive services. “We invest in a lot of communities, particularly communities of color, where there aren’t a lot of things around it that make great neighborhoods today,” said Carter.

HPET and Avanath Capital Management operate in two adjacent “bands” of affordable housing, with HPET handling a market segment that only incidentally receives local housing subsidies. “We typically serve households making between 50 and 60 percent of the area median income (AMI),” said McCulloch. “For every 100 of these households, there’s 50 units that are affordable to them.” By contrast, Carter’s Avanath Capital Management focuses most of its attention on preserving the affordability of developments built using public programs that serve residents earning between 30 and 60 percent of AMI. Both entities use private money to extend the reach of public spending; Avanath by either preventing developments from aging out of affordability programs or rehabilitating and upgrading those that remain affordable but have fallen into disrepair, and HPET by obviating the need for direct public housing spending entirely while maintaining a target population’s ability to take advantage of scarce education and transit dollars.

Although each entity’s strategy differs, their investor profiles are relatively similar. Carter and McCulloch both report that their pool of investors includes risk-averse entities such as insurance companies, foundations, and endowment funds. HPET also counts philanthropies among its investors, with McCulloch stressing that “investors invest with us for impact.” Carter observed that the biggest issue the firm faces is market perception. “People perceive affordable housing as much riskier than it is.”

The final entity the speakers discussed is Nico, a public benefit corporation formed to create real estate investment trusts (REITs) for individual neighborhoods. Nico, a startup that became public in March 2020, has established one neighborhood REIT in Echo Park, Los Angeles, that owns three rent-controlled apartment buildings with a combined 80 residential and 4 commercial units. After purchasing the buildings, Nico made efficiency and longevity-enhancing improvements by installing energy-efficient appliances and greywater systems. According to cofounder and chief operating officer Max Levine, Nico’s leadership plans to expand the neighborhood REIT model to new markets over the next 12 to 18 months.

Nico was founded on the principle that local residents would benefit from not only the preservation and improvement of affordable housing but also from the opportunity to become investors in the REIT themselves. “What we’re trying to do through the model is give thousands of renters within a community a way to invest in their neighborhood that is accessible, fair, and responsible,” said Levine. He likened contributing to a neighborhood REIT to the financial benefit experienced by homeowners, who build equity while making mortgage payments. To ensure a low barrier to entry so that more people could participate and begin receiving passive income in the form of dividends, Nico set a minimum one-time investment amount of $100. As part of the trust’s response to the COVID-19 pandemic, Nico Echo Park offered Community Wealth Grants of up to $1,000 in shares to each household and business renting in the trust’s three properties. Although Nico especially encourages Echo Park’s own residents to invest, it imposes no restrictions on prospective investors.

Although the featured firms take different forms, all of them represent a means by which capital from private investors can be leveraged to expand affordable housing. The way in which each entity accomplishes this goal differs; Avanath steps in primarily to extend the lifespans of properties built with public funds, HPET preserves naturally occurring affordable housing, and Nico targets neighborhood-specific apartment buildings and helps residents build wealth. Each firm presents a model for investor-funded affordable housing.