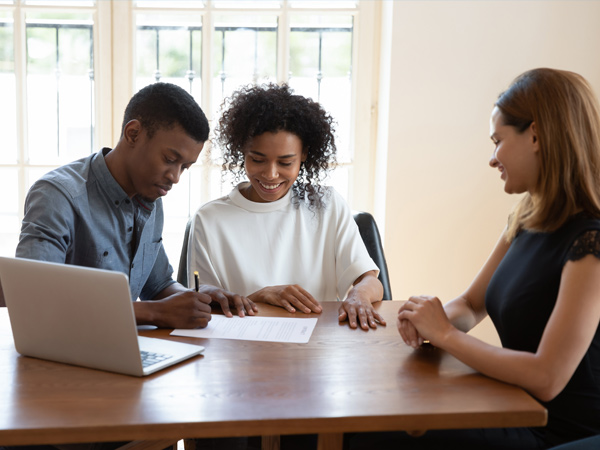 AI models assess more variables than legacy credit scoring models to give a more accurate picture of a person’s creditworthiness and to help address the racial and gender inequalities in credit access. Photo credit: istockphoto.com/fizkes

Access to fair mortgage products is crucial to many families’ ability to become homeowners. Mortgage access depends on assessments of the risk that a borrower will default, which typically are made through traditional credit scores and other financial information from lending institutions. Legacy models, or traditional credit scoring models, exclude many families from homeownership because these models do not assess consistent gig work, self-employment, a history of timely rent payments, among many other variables that demonstrate a person's credit worthiness. These models work to disproportionately exclude people of color from accessing credit and therefore homeownership. On October 13, 2021, the National Housing Conference hosted a virtual “Tech & Housing” symposium, with one panel examining how artificial intelligence (AI) and machine learning might help make access to mortgages more equitable without adding risk to the overall housing finance system. Panelists included Sheree Garner, regulatory counsel for government affairs at Rocket Mortgage; Teddy Flo, chief legal officer at Zest AI; Phil Bracken, managing director at VantageScore Solutions; and Ethan Dornhelm, vice president of the Fair Isaac Corporation’s scores and predictive analytics unit. Moderating the discussion was Michael Akinwumi, who leads the Tech Equity Initiative at the National Fair Housing Alliance.

The panelists began by laying out the inadequacies of the traditional measures of borrower risk used in legacy credit scoring models. Bracken pointed out that research by the Joint Center for Housing Studies of Harvard University projects that 80 percent of new household formation over the next 20 years will be among people of color, yet legacy credit assessment systems disproportionately exclude underserved markets and people of color from homeownership. An inherent flaw in those systems, says Flo, is the limited number of data points the models are capable of assessing — data points that systemically favor white borrowers. Borrowers of color, said Garner, are less likely to meet the traditional models’ standards for an acceptable level of lending risk. As the realities of the U.S. economy change, said Garner, leaders in applying AI to credit decisions must educate policymakers and the government-sponsored enterprises (Fannie Mae and Freddie Mac) on why the use of novel data types will accurately reflect borrower risk without increasing risk to the housing finance system.

The panelists agreed that alternative data sources are key to creating fairer risk assessment models that will increase racial and gender equity in access to homeownership. Bracken estimated that, with novel data sources, AI has the potential to provide credit scores for 37 million Americans who currently are not scorable; of those, up to 13 million could have a credit score of 620 or higher, meaning that, with some effort, they could soon be considered eligible for mortgages.

Whereas traditional models incorporate approximately two dozen variables in their assessments, a central strength of AI, according to Flo, is its ability to assess a great deal more to more accurately predict a person’s creditworthiness. The increased volume of potential input renders these models much more robust to partial information than traditional scoring methods. Dornhelm pointed to another advantage: the emerging availability of many more types of data can give consumers more control over which personal data they are willing to share. These inputs reflect the reality that many people live financially stable lives in ways not captured by legacy models and can include factors such as a history of timely rent and utility payments; income earned from working in the gig economy, might traditionally be seen as less stable; and bank account cash flow information.

In addition to assessing more data, AI can assess huge numbers of permutations of the models themselves to see how model construction — the way each variable’s importance is weighted and considered — can produce more or less fair outcomes, said Flo. Even when factoring in the shock of the coronavirus pandemic, AI models produced by Flo’s organization were markedly more stable than the legacy models. Bracken and Garner noted that AI should be used not to find ways to extend credit to risky borrowers but rather to find responsible borrowers not currently visible using existing systems. Garner distinguished between the risk posed by an individual borrower and the risk posed by a credit product, explaining how the housing crisis that led to the Great Recession resulted from irresponsible subprime mortgage products rather than the risk posed by individual borrowers, many of whom could have met the obligations of a traditional mortgage product.