Supportive Housing for a Diverse Community in the Bronx 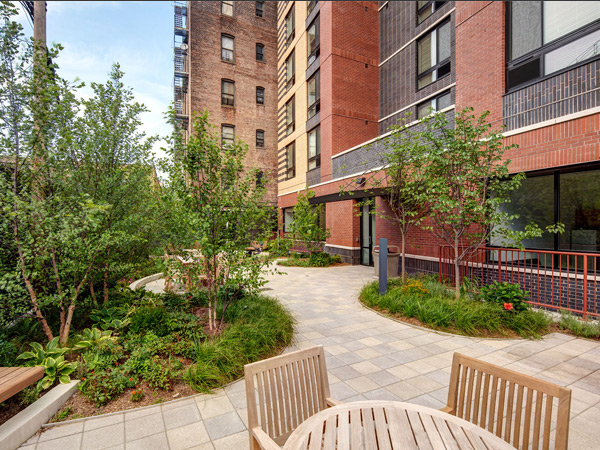 When Walton House opened its doors in July 2018 in the Bronx, it launched a community that even its founders did not originally anticipate. Serving a mix of housing-insecure veterans and young adults (40 percent of whom identify as lesbian, gay, bisexual, or transgender), Walton House’s 89 units of affordable supportive housing provide a stable platform for helping people recover from past traumas and rebuild their lives. In addition to advancing the goals of the development team, the Jericho Project and B&B Urban, Walton House is the first supportive housing project to open under New York City’s 15/15 Initiative — a promise by the city, announced in late 2015, to develop 15,000 units of supportive housing over 15 years. Walton House is helping make that promise a reality to some of New York’s most vulnerable residents.

The 89 studio apartments at Walton House are furnished and range from 300 to 450 square feet. Each unit features large windows, a kitchen, and a private bathroom compliant with the Americans with Disabilities Act. Of the total units, 56 are reserved for veterans and 33 are set aside for young adults. Because the young adult and veteran residents are likely to have differing schedules and value their respective communities, each floor consists solely of residents from the same group. However, shared amenities, including a wi-fi lounge, laundry facilities, a fitness center, an outdoor garden, and a library nook built by the nonprofit Reading Is Fundamental, help foster connections across and within groups. Each group also has a dedicated community room. In the veterans’ room, one group is working collectively on a mural, while video game consoles offer entertainment in the young adults’ room. 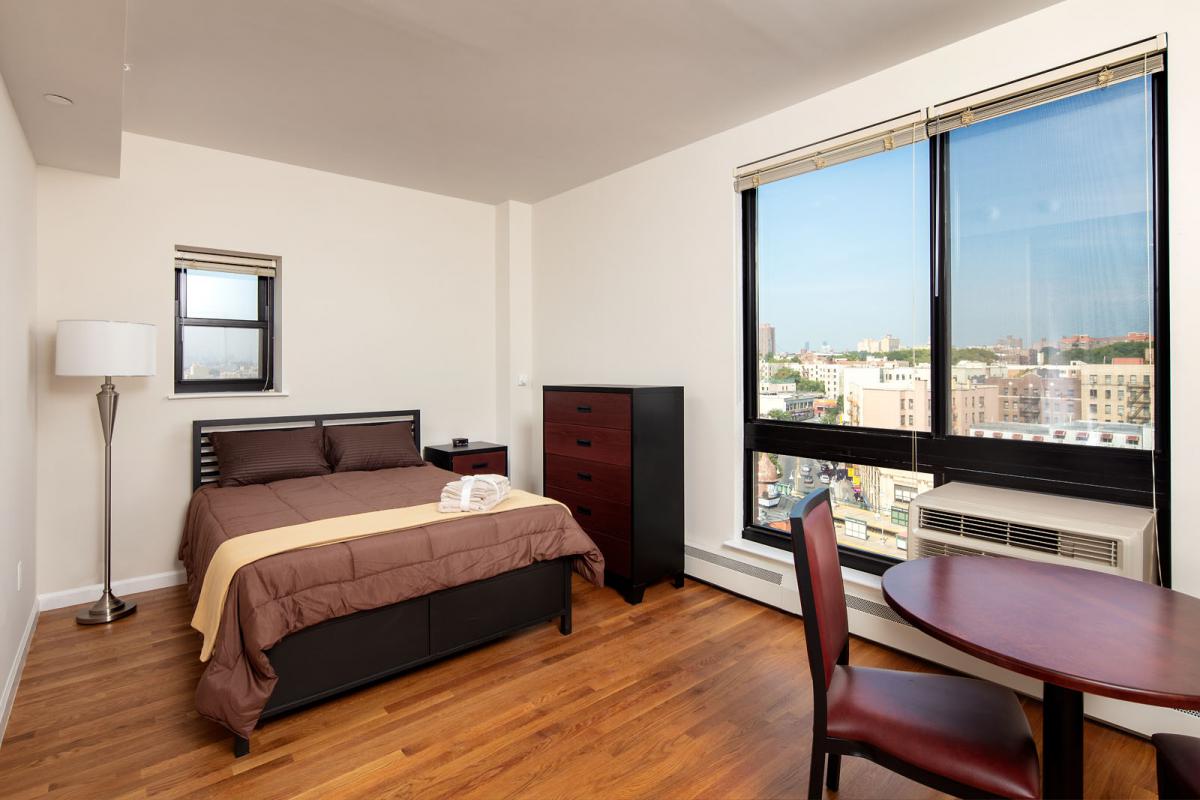 One of the apartments at Walton House. Each unit features a large exterior-facing window and comes furnished. Photo credit: James Shanks

Every unit at Walton House comes with a project-based voucher to ensure that residents pay no more than 30 percent of their income toward rent. The veterans’ units have U.S. Department of Housing and Urban Development-VA Supportive Housing (HUD-VASH) vouchers, which also support the services they receive. For the young adults’ units, Walton House receives project-based Section 8 vouchers awarded by the New York City Housing Authority. Supportive services for the young adults are funded through a $4.2 million services grant from the 15/15 Initiative distributed at a rate of $845,000 annually. Permanent financing for Walton House came from low-income housing tax credit equity of $14.3 million from Wells Fargo, a $9.5 million grant from the New York City Department of Housing Preservation and Development, a permanent loan of $5.6 million, a $4.4 million grant from the state’s Homeless Housing and Assistance Program, a $700,000 grant from Home Depot, and a $600,000 New York Federal Home Loan Bank grant.

The distinct needs and funding streams for the two groups mean that their eligibility requirements and services received differ. Veterans are referred to Walton House through the U.S. Department of Veterans Affairs (VA) and must meet the requirements for VA health care, have experienced homelessness, and need case management to be eligible for the HUD-VASH voucher units. Young adults are referred by a number of city agencies and face less stringent requirements. For example, young adult residents do not need to have experienced literal homelessness; those who find shelter through couch surfing are eligible for units. 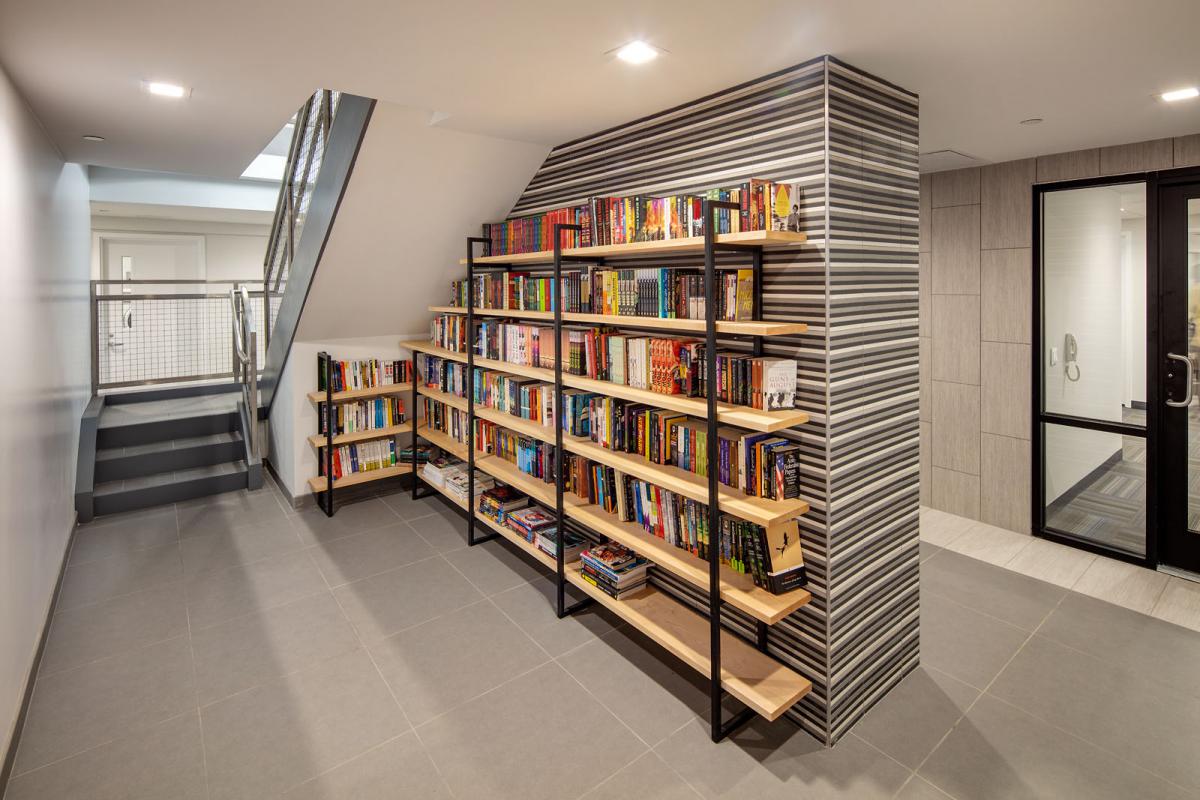 A partnership with Reading is Fundamental allowed for the installation of small informal library in one of the common areas of Walton House. Photo credit: James Shanks

Jericho Project partners with the local VA medical center to provide onsite supportive services for veterans, including case management (provided by VA) as well as a veterans services coordinator and a peer mentor employed by Jericho. An important component of the service model for young adults is access to counseling and therapy to aid with long-term stability. According to Tori Lyon, chief executive officer of Jericho Project, one of the major issues for the young adult population is the underlying trauma that first led to the housing instability. In both cases, Jericho’s strong belief in the importance of employment for building self-esteem, empowerment, and a sense of purpose guides its service provision, including career counseling and job placement services. Moving residents toward greater independence and away from more service-intensive living is the ultimate goal at Walton House, although Jericho, which operates under the Housing First model, imposes no time or age restrictions on residents.

Lyon says that one of the biggest surprises at Walton House has been the unexpected benefits of intergenerational living. She cites as one example the informal cooking classes taught by one of the veterans, herself a former Army cook. The young adults are doing more than learning to prepare healthy meals — they’re building relationships with adults who function as role models and mentors.

Walton House is Jericho Project’s eighth supportive housing development in New York City. The organization currently operates more than 500 units of supportive housing, primarily in the Bronx, and assists more than 2,500 children and adults — including 750 veterans — with housing, homelessness prevention, and workforce development each year. Although New York City has made significant strides toward addressing homelessness among veterans over the past several years, Lyon points out that the quick rent-up at Walton House, which look less than 2 months from its opening, demonstrates the ongoing need for affordable supportive housing.