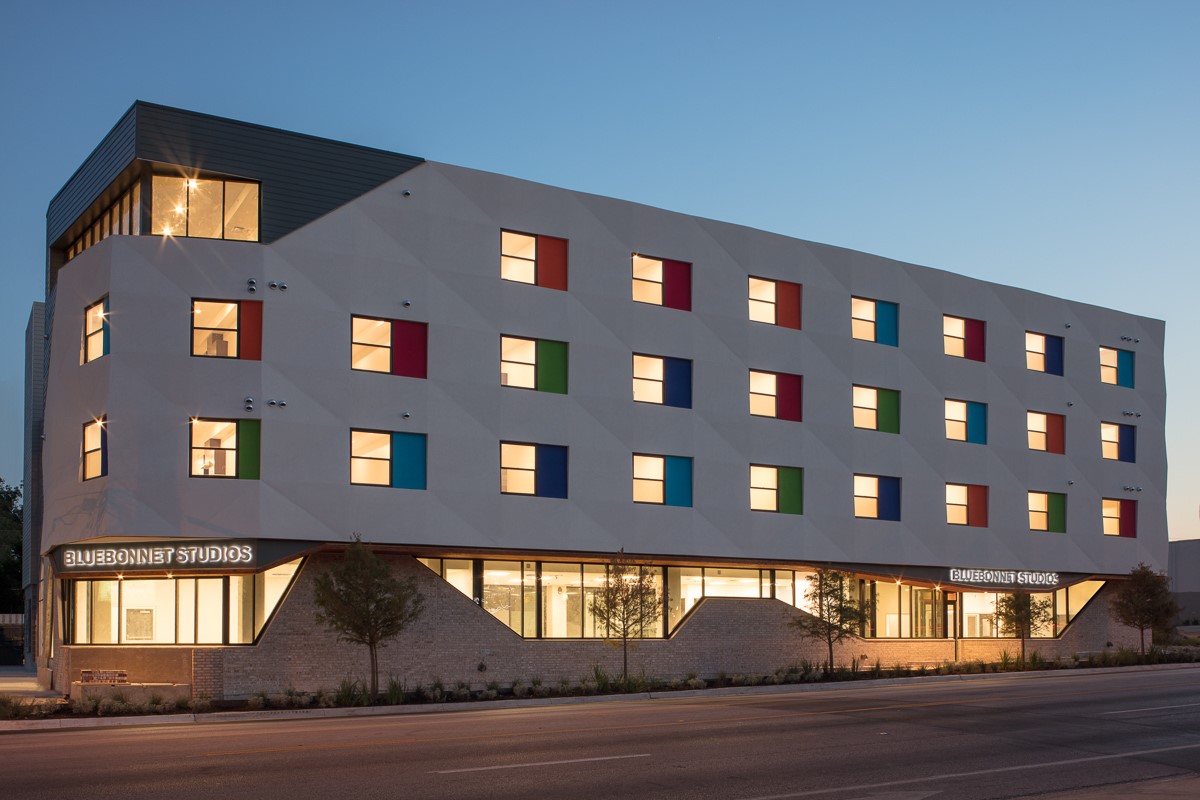 Austin, Texas, is nicknamed the “Live Music Capital of the World.” Recent surges in rent prices, however, combined with stagnating wages and a shortage of affordable units, threaten to displace many low-income Austinites, including local musicians. Opened in late 2016 in Austin’s South Lamar neighborhood — a rapidly gentrifying area where high rents have already forced several local music venues to close— Bluebonnet Studios provides affordable housing and onsite services to low-income musicians and vulnerable populations such as individuals experiencing homelessness, veterans, and young adults who have aged out of foster care. Bluebonnet is the 22nd supportive housing community developed by local nonprofit Foundation Communities and the 6th designed specifically for single adults. This $20 million, 4-story complex features 107 efficiency units, 10 of which are prioritized for low-income musicians thanks to a donation from a local philanthropist dedicated to keeping Austin affordable for musicians. In addition to owning and operating Bluebonnet, Foundation Communities is the development’s primary service provider, employing a wraparound service model targeting both the physical and mental health of residents. Services include health, education, and financial programs, all of which are free for residents.

One of Austin’s goals is attracting and retaining talented and creative individuals, but a booming real estate market and rising rents make it difficult for low-income members of the creative class to stay in the city. A 2015 census of local Austin musicians indicated that an increasingly high cost of living and economic instability are the main factors that influence their ability to stay in Austin. In addition to the creative class, many other low-income populations fear that there isn’t enough affordable housing in the city. According to Austin’s Strategic Housing Blueprint, in 2014 the city had a shortage of 48,000 rental units affordable to those earning less than $25,000 per year. 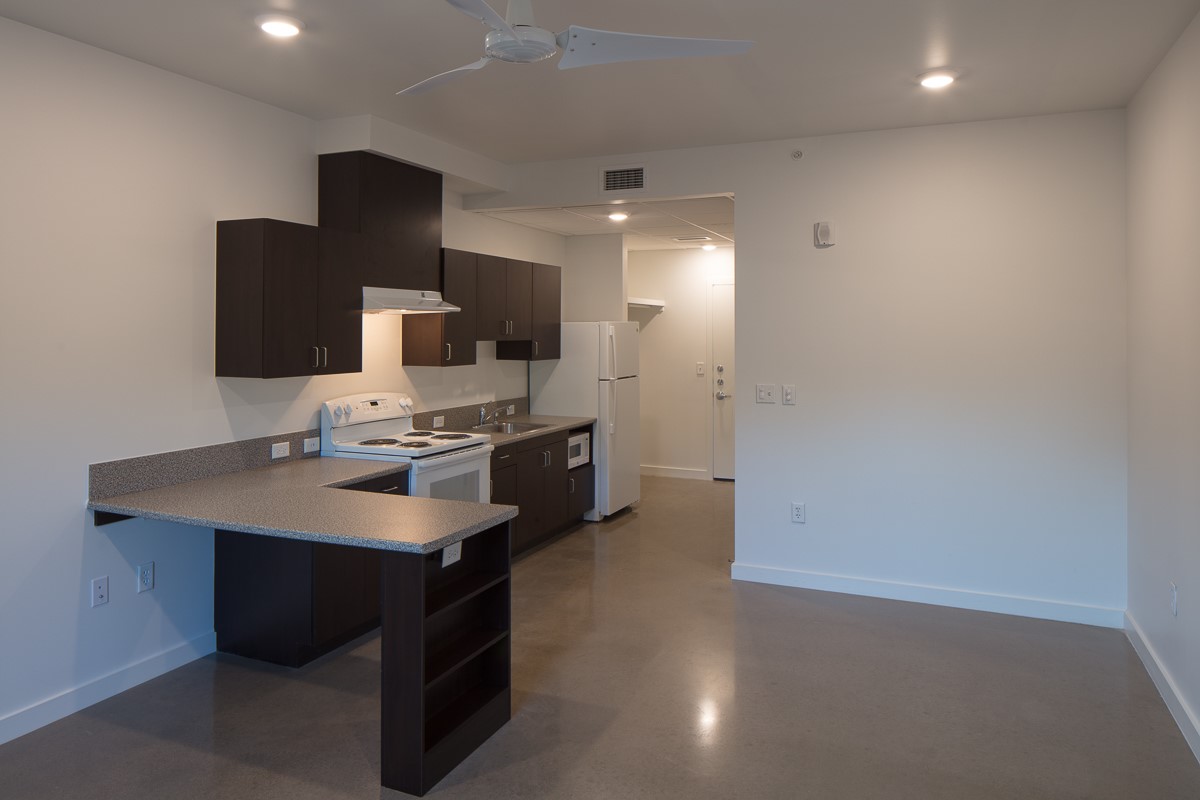 Each unit at Bluebonnet is about 430 sq. ft., include a full kitchen and bathroom, and are accessible to individuals in wheelchairs or with other disabilities. Rents range from about $400-700. Credit: Foundation Communities

Bluebonnet Studios broke ground in June 2015 in the South Lamar neighborhood. Walter Moreau, executive director of Foundation Communities, noted that the foundation was fortunate to be able to acquire a site close to downtown Austin, local transit, and several music venues considering the rapid gentrification of the neighborhood. Because Foundation Communities had previously developed another successful housing community in South Lamar, the South Lamar Neighborhood Association fully supported the Bluebonnet Studios project. Additional financial support from the city allowed Bluebonnet to be completed in late 2016. By opening day, Bluebonnet had received more than 900 applications for its 107 units, and the waiting list, which is capped at 30 applicants, is full.

Each efficiency unit at Bluebonnet Studios is approximately 430 square feet and includes a bathroom and full kitchen. All apartments adhere to universal design principles and are accessible to persons in wheelchairs or with other disabilities. Rents range from $420 to $710 and include all utilities. Sixty percent of the units are reserved for individuals earning less than 50 percent of the area median income (AMI), 20 percent are reserved for those earning less than 40 percent of AMI, and 20 percent are reserved for those earning less than 30 percent of AMI. In addition, 22 units are designated for veterans, 22 for those experiencing chronic homelessness, 10 for musicians, and 6 for young adults who have aged out of foster care. Amenities at Bluebonnet include a computer lab, TV lounge, game room, community kitchen, and onsite laundry. Bluebonnet is also a bicycle-friendly and smoke-free community, and the nearest transit stop is only 145 feet away. First-floor office space is reserved for onsite staff and community partners such as the U.S. Veterans Administration, which visits weekly to assist Bluebonnet’s veteran population.

Because Foundation Communities believes that offering services onsite makes participation easier for residents, the organization provides free services to all residents of their housing communities. Moreau states that Foundation Communities’ wraparound services model targets “whatever somebody needs help with,” but Bluebonnet is not an assisted living community. Services offered at Bluebonnet include adult education classes; a variety of fitness programs, including yoga, tai chi, Zumba, and a walking club; a food pantry that provides free and healthy food options every day, smoking cessation classes, and a weekly supper club. Foundation Communities also provides financial services such as free income tax preparation and money management classes, but these are typically held offsite.

The total development cost for Bluebonnet Studios was approximately $20 million. The state awarded the development $8.9 million in 9 percent low-income housing tax credit equity. The city of Austin provided an additional $3.7 million, and the development received a $1.5 million grant from the Federal Home Loan Bank and a $590,000 grant from the Tax Credit Assistance Program. Foundation Communities also raised about $4 million from various foundations and individual donors, and its developer fee of $1 million was deferred.

Although Foundation Communities is seeking new opportunities for family and single-adult housing developments, it must compete for land in one of the hottest real estate markets in the country. Currently, Foundation Communities is competing for tax credits to build their next supportive housing community in the North Austin area and is looking for land to build more family apartments.