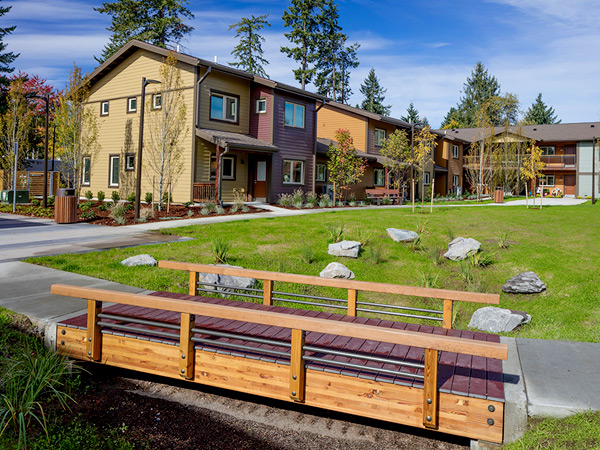 Nonprofit developer Bridge Meadows specializes in creating affordable intergenerational communities for low-income foster families and seniors. Their community model establishes a supportive environment for foster families while also offering senior residents, referred to as “elders,” an opportunity for active community engagement. Following the success of their first intergenerational community in North Portland, Bridge Meadows opened their second community, Bridge Meadows Beaverton, in 2017. The community consists of 9 single-family townhomes for foster families, 32 senior apartments, and a community building, built around a central courtyard to enhance connection and visibility. Eligible residents include families who agree to provide a permanent home to three or more children in the foster care system. Also eligible are individuals aged 55 and over who informally agree to volunteer in the community — anything from mentoring a child to taking a resident to the doctor.

The Need for Intergenerational Living

Founded in 2004 in Portland, Oregon, Bridge Meadows is modeled after the similarly named Hope Meadows community in rural Illinois. The brainchild of Dr. Brenda Eheart — a former professor of sociology at the University of Illinois who studied the foster care system — Hope Meadows was designed to be an intergenerational neighborhood where adoptive families are supported, foster children have a place to call home, and senior residents can find purpose and meaning in their lives. Bridge Meadows adapted the Hope Meadows model in Oregon, where both the lack of affordable housing and the number of children placed into foster care are at crisis levels. 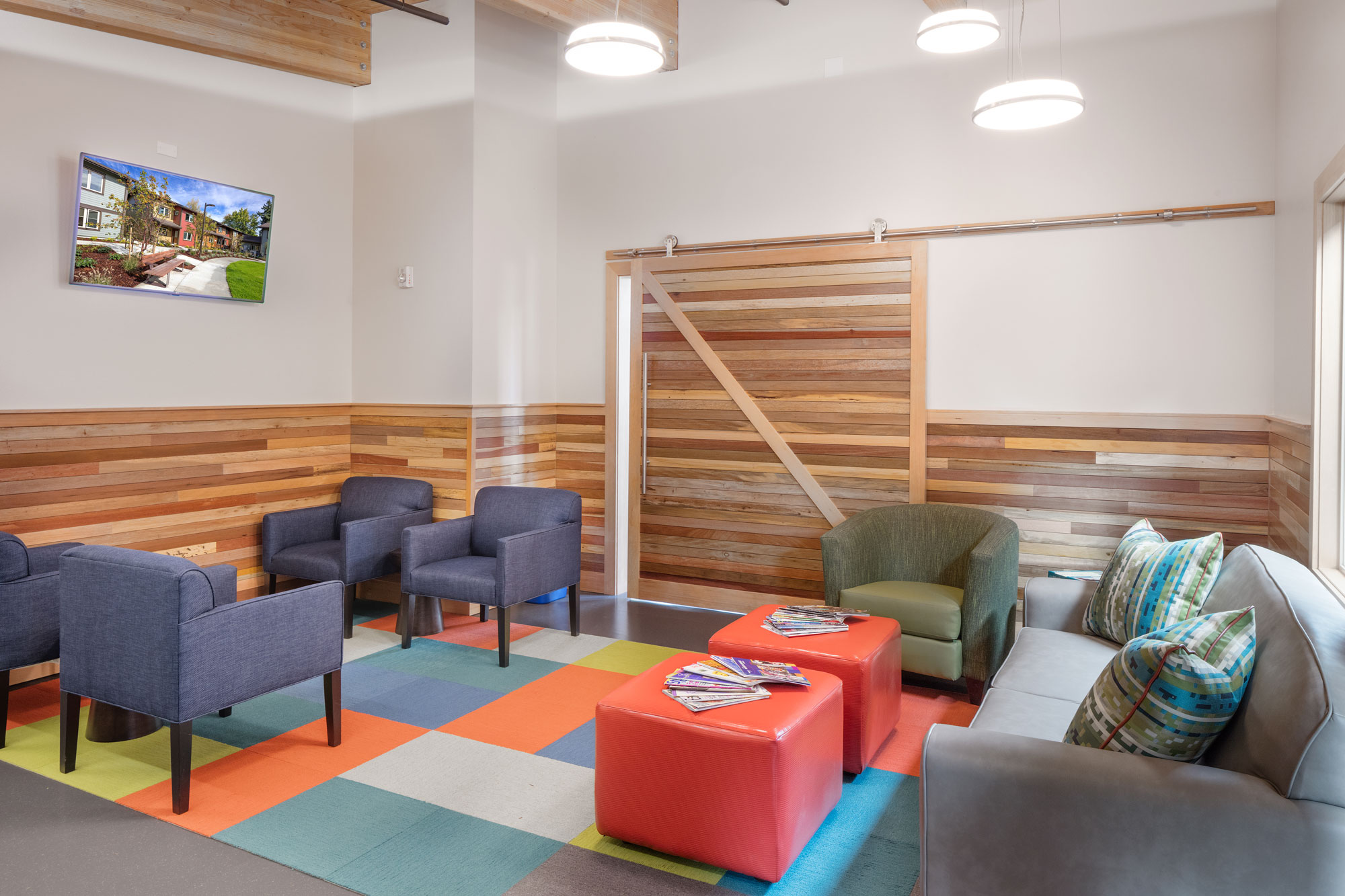 Bridge Meadows Beaverton includes a dedicated community center where residents can relax, play, share a meal, or take part in one of the many classes and programs offered at the community. Photo credit: Bridge Meadows

According to Oregon’s Department of Human Services (DHS), in 2017 an average of approximately 8,000 children were in foster care daily. DHS is currently reshaping Oregon’s child welfare program to better support foster families and keep sibling groups together and out of the system. The latter goal often proves challenging because the average sibling group consists of three children, which makes finding appropriately sized yet affordable housing difficult for their foster parents.

In addition, an estimated 60 percent of rental households in Beaverton with seniors over the age of 60 are cost burdened, paying more than 35 percent of their income on housing, and nearly 10 percent of seniors over 65 live in poverty. According to Dr. Derenda Schubert, executive director of Bridge Meadows, many of the elders at Bridge Meadows were forced out of their homes for financial reasons or because they suffered a life crisis — such as a medical emergency, family death, or divorce — that severely impacted their income.

Located just west of Portland in the city of Beaverton, Bridge Meadows Beaverton broke ground in September 2016 and opened its doors in August 2017. Situated on a 2-acre site, the Beaverton community includes 41 residential units consisting of 9 family townhomes and 32 senior apartments. In total, six buildings make up the Beaverton community: two apartment buildings for elders, three family townhome buildings, and one community building. The family townhomes are split into three- and four-bedroom units and include garages. The apartments for elders consist of one- and two-bedroom units with onsite parking provided. The community building features a large gathering space used for community programs, exercise classes, and playtime for children as well as a kitchen used for a weekly community dinner, among other activities. Strategically sited buildings and pathways encourage spontaneous meetings among residents. Elder apartments are placed adjacent to family townhomes to foster interaction among residents of different generations. The center of the community features a large courtyard with a community garden that acts as a safe, highly visible backyard for all residents.

The nearly $15 million development cost was financed with $9.5 million in equity from 9 percent low-income housing tax credits, a $2.3 million loan from JPMorgan Chase, $230,000 from the city of Beaverton, $815,000 in HOME funds, $450,000 from Oregon Housing and Community Services, and $1.2 million raised in a capital campaign.

Community with a Purpose

At its core, Bridge Meadows Beaverton is a tight-knit community. Although the community’s open nature may not be for everyone, Beaverton’s approximately 66 residents have experienced many benefits. Foster children are attending school more consistently and achieving higher levels of academic success, thanks in part to a life filled with stability and support. Adoptive parents also benefit from the round-the-clock community support, and, according to Schubert, many feel better equipped to handle the trauma and stress involved with being a foster parent. Finally, Bridge Meadows provides elders with an important reason to get up every day through regular community engagement. As part of their role at Bridge Meadows, elders commit 100 hours per quarter to community volunteering. Hours can be made up with a wide range of activities, but less importance is placed on the actual activity than on the relationships and support developed during this time.

In addition to the general support provided at Bridge Meadows, residents can choose from a variety of programs. According to Schubert, these programs come in three varieties: staff-produced programs, which include all of the support groups; staff- and resident-produced programs, such as an intergenerational art class; and resident-produced programs, which can vary depending on what the elders would like to teach. Because of the elders’ considerable autonomy, says Schubert, Bridge Meadows staff often don’t know what types of classes or programs the elders are leading, although staff is always available to offer assistance or supplies if needed.

Although Bridge Meadows Beaverton is still in its early phases, it’s already benefiting the surrounding community while also providing a safe home for many. Schubert says that residents from nearby neighborhoods will drive out of their way to attend the exercise classes and other programs offered at the Beaverton community, and this public outreach is expected to grow. Furthermore, after the success of their first two intergenerational communities in the Portland metropolitan area, Bridge Meadows is hoping to create more communities in Oregon and beyond. Bridge Meadows has two communities on the drawing board, and a new community for young adults aging out of foster care, named New Meadows, is opening this summer down the street from their North Portland community and will provide a safe home to 15 youth transitioning out of foster care.