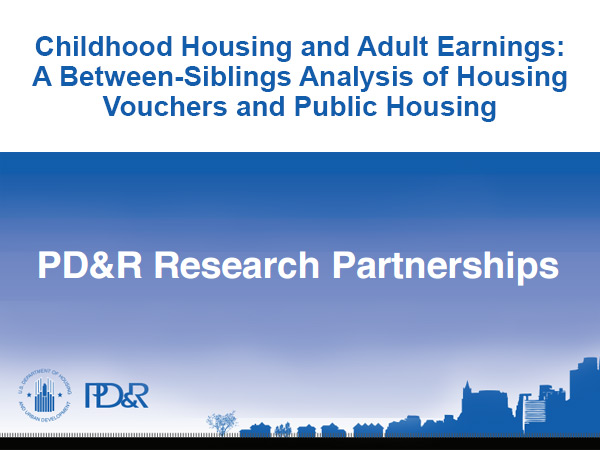 A recent report sponsored by HUD’s Office of Policy Development and Research through its Research Partnership program sheds new light on the long-term effects that participation in voucher-assisted and public housing can have on future earnings and incarceration rates. The study is: “Childhood Housing and Adult Earnings: A Between-Siblings Analysis of Housing Vouchers and Public Housing.”

This study shows that children whose families receive HUD rental assistance while they were teenagers grow up to have higher earnings and lower incarceration rates in their early twenties. The study examines the long-term effects of public housing and voucher-assisted housing as a teenager on adult earnings and incarceration, enabling the direct comparison of both programs to each other and to private market housing.

The study contributes to a growing body of research demonstrating that housing assistance generates long-term positive outcomes for residents. For example, for females each additional year spent in public housing as a teenager generates a $488 annual premium for young adult earnings. The corresponding estimate for voucher-assisted housing is $468 per year of participation. For males, the corresponding estimates are $508 and $256, respectively

This is the first nation-wide study to estimate the long-term economic effects of both public and voucher-supported housing based on data using a nationally-representative sample. The research is based on a new large-scale confidential database that matches Census data (including data from the 2000 and 2010 decennial Census and Longitudinal Employer-Household Dynamics data) with long-term HUD administrative program data from the 1990s to 2010s. This database will be made available to researchers through the Census Bureau’s Research Data Center. The data represent a new extremely rich source of information for further analysis on outcomes, effects and program evaluation of vital government housing programs.

The study was conducted by a joint research team with experts from the University Of Maryland (College Park), the Census Bureau, the Office of the Comptroller of the Currency, the International Food Policy Research Institute, and Harvard University. HUD contributed to the study through a Research Partnerships cooperative agreement funded by PD&R.

The research shows that receiving housing assistance as a teenager is positively correlated to increased earnings as an adult. The study also finds that longer duration of receiving rental assistance is positively associated with higher earnings.

Through the study, researchers identified statistically significant variation among racial and ethnic groups. For example, non-Hispanic, African-American women experienced the most significant earnings increase from an additional year of living in public housing ($549) or voucher-assisted housing ($704). Non-Hispanic white women did not experience a statistically significant increase in earnings, however. Among males, the earnings premium is similar among both non-Hispanic African Americans and whites.

The study explores the benefits that HUD’s primary subsidized housing programs can have on adolescents later in life.

To better understand the effects of housing assistance on future earnings and incarceration rates while also controlling for household-related effects, the researchers combined 2000 and 2010 census data with comprehensive longitudinal HUD administrative data on earnings and housing assistance to create a nationally representative sample.

The research design controlled for household effects by comparing outcomes among siblings aged 13 to 18 within households; in these households, either some siblings resided in subsidized housing while others did not, or the siblings lived in subsidized housing for different amounts of time. Using a between-siblings approach isolates the effect of the assistance on adult outcomes from observed and unobserved household-level differences that may affect both program participation decisions and adult outcomes. This methodology helped address the selection bias that occurs when comparing households who reside in HUD subsidized housing with those that do not.

“Childhood Housing and Adult Earnings: A Between-Siblings Analysis of Housing Vouchers and Public Housing” represents important new research that will help policymakers better understand the effects that HUD’s two largest housing subsidy programs can have on future earnings and incarceration rates. By controlling for household effects and comparing siblings at the household level, the researchers were able to control for selection bias among households in subsidized housing. The research helps demonstrate that, contrary to some previous notions, participating in HUD’s rental assistance programs can have positive effects on earnings, incarceration rates, and self-sufficiency.

Across the population, teenagers whose families received HUD rental assistance experienced higher earnings and lower incarceration rates than did siblings who spent less time in subsidized housing or did not have housing assistance at all. Importantly the study found strong positive effects for both Public Housing and Housing Choice Vouchers.

There are a number of ways that rental assistance might benefit children and their families in ways that might affect later adult outcomes. For example, parents and families overall may be able to devote more time and money for their children and for other household necessities. Rental assistance may also provide a more stable living situation and environment for children. For example, HUD’s Family Options study finds that providing housing assistance versus normal care leads to long-term housing stability, lower victimization, and positive child outcomes.