The Future of American Cities 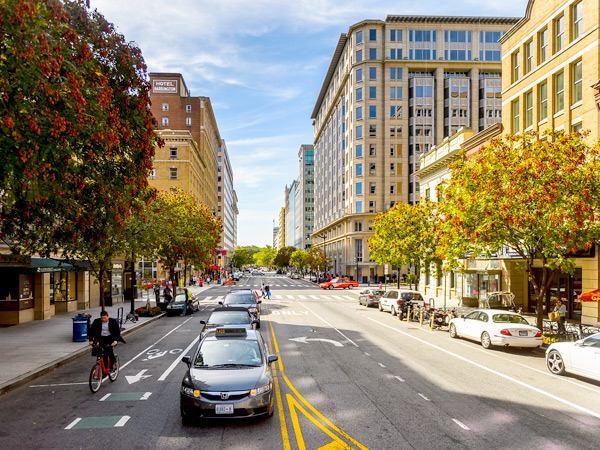 Cities abundant in amenities and opportunities for entrepreneurship can attract newcomers and retain current residents.

Developing inclusive cities is critical to increasing opportunity in urban areas. Panelists emphasized that doing so requires keeping long-term residents, attracting newcomers, and improving connectivity. Courtney Snowden, District of Columbia deputy mayor for greater economic opportunity, emphasized the need for long-term residents to “gentrify in place” and participate in new development occurring around them rather than be displaced because of high housing costs. Furthermore, cities that encourage entrepreneurship and local hiring foster environments that encourage residents to develop their own financial freedom. The six-month Aspire to Entrepreneurship program in Washington, DC, invests in human capital by giving ex-offenders the tools needed to start their own businesses and reintegrate into the workforce. Following a successful pilot in 2016, the city’s Department of Small and Local Business Development continues to support participants through stipends and matched-savings accounts to boost financial freedom and support the growth of local businesses in the District. Panelists also discussed the need to create incentives for essential public employees to live in the neighborhoods where they work. In fact, many cities, including Boston, New York City, and the District of Columbia have residency requirements for public employees, which cultivates a personal interest in the well-being of the communities they serve and is vital in emergencies that require first responders.

Panelists shared successful efforts to boost connectivity and community pride among residents. Benjamin de la Pena, deputy director for policy, planning, mobility, and right of way in the city of Seattle’s Department of Transportation, emphasized the need to support “geographical social capital” by examining social and physical connections. With voter approval, Seattle has invested more than $50 million in transportation. Currently, 64 percent of households live within a 10-minute walk of public transportation, and the city aims to increase this number to 72 percent by 2025. Yet, with people moving from Seattle to areas with more affordable housing, concern is growing that mid-sized cities such as Tacoma will become “bedroom communities,” said Marilyn Strickland, former mayor of Tacoma, Washington. Thus, local campaigns such as “Live Like the Mountain Is Out” and “South Sound Proud” are critical to encourage locals and newcomers to explore all the assets that Tacoma has to offer, such as the Tacoma Art Museum, aquarium, and outdoor recreation facilities.

Cities can also look to their own local colleges and universities as assets for attracting newcomers and retaining residents. For example, Yale-New Haven Hospital (YNHH) implemented the Home Ownership Made Easier program in 2006, which offers full-time hospital employees up to $10,000 in five-year, forgivable loans if the employee lives in the home and works at YNHH for at least five years. To retain intellectual capital, New Haven and the state of Connecticut have also taken steps to increase train service throughout Connecticut and the Northeast Corridor, promote off-campus housing, and offer incentives to encourage police to reside in local community.

Public-private partnerships (P3s) are one policy tool to boost affordable housing production, by leveraging private investment, increasing efficiency, and encouraging place-based development. Eric Shaw, director of the District of Columbia Office of Planning, spoke of the promise that P3s have for creating more affordable housing. The Development and Finance Division of the D.C. Department of Housing and Community Development administers the Housing Production Trust Fund (HPTF), which offers low- and no-interest loans to developers to construct or renovate affordable housing. As in the previous two fiscal years (FY), FY 2018 will reach a high funding mark, with $100 million allocated to HPTF from taxes and supplemental funding to construct or preserve approximately 1,000 affordable housing units. The FY 2018 budget also allocates $10 million toward a housing preservation fund that will help the city leverage private investment to recover its declining stock of affordable housing. Steve Glickman, cofounder and executive director at Economic Innovation Group (EIG), acknowledged that one characteristic of an ideal city is that it embraces P3s and recognizes that the public sector cannot solve inequality alone.

The Future of Transportation

As technological advances in automation and mobile phone applications continue, transportation has increasingly become a service. Current trends indicate a decline in car ownership and an increase in ride sharing. Just as transportation evolved from horse-drawn carriages in the early 20th century, the 21st century will see a rise in on-demand, shared, and autonomous transportation, predict Rick Azer, associate vice president at Black and Veatch, and Andrei Greenawalt, vice president for public policy at Via. Autonomous or driverless cars are computer controlled, eliminating the need for a human to be behind the wheel. Electric vehicles, autonomous cars, shared rides, and pedestrian- and bike-friendly streets can help cities reduce the number of cars on the roads, improving traffic congestion and air quality. Although individual car ownership is still highly prevalent, U.S. cities will need to examine legal challenges, ethics, state regulations, and safety measures associated with new modes of transit.

To improve resilience, cities must devise incentives for developers and engineers to develop infrastructure that can withstand damage from natural disasters. Stephen Flynn, founding director of the Global Resilience Institute (GRI) at Northeastern University, discussed the current tendency among planners to design for efficiency rather than resiliency. Flynn recommended that cities combine development initiatives with resilience strategies and encourage collaboration between planners and emergency managers. According to GRI, several barriers persist that hinder cities from taking steps to become more resilient, including a lack of training about the interdependence of our infrastructure, limited understanding of how to incorporate resilient elements into building designs, few economic incentives to develop resilient designs, and minimal focus on monitoring and evaluating resilience in infrastructure. Flynn also articulated the need to harness public support through social media outlets, recognizing the important role that citizen responders play in postdisaster recovery. Tapping into such networks could improve cities’ ability to withstand future disasters.

Developing affordable housing, inclusivity, and resilient infrastructure will be critical challenges facing American cities in the future. By accommodating technological advances in transportation and other infrastructure systems, expanding the use of P3s to leverage limited resources, and boosting community engagement, cities can address these issues and build more resilient communities.