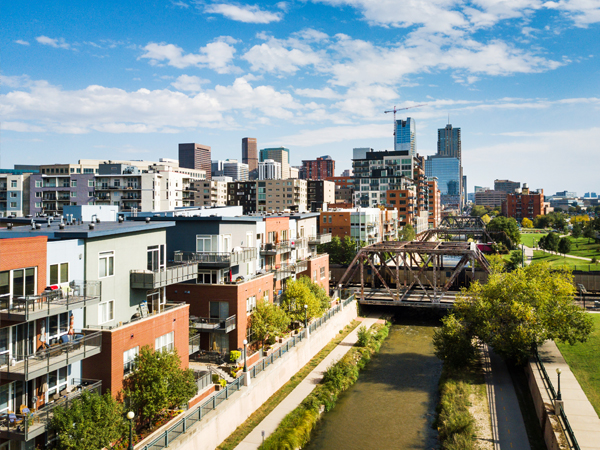 Savings from the success of the Denver SIB benefit the city and county of Denver, and demonstrate that supportive housing programs are more beneficial for addressing chronic homelessness. Photo credit: istockphoto.com/Stefan Tomic

In 2016, Denver, Colorado, launched a supportive housing program with comprehensive wraparound services intended to help stabilize individuals experiencing chronic homelessness and frequent incarceration. The program, called the Supportive Housing Social Impact Bond Initiative (Denver SIB), ran for 5 years and used $8.6 million in startup funds furnished by private and philanthropic investors. This innovative funding contract was an iteration of the Pay for Success financing model, requiring no upfront public funds and obligating no repayment if the program failed to deliver results. Instead, the city of Denver issued periodic repayments to the investors based on how well the Denver SIB performed using two primary measures of success: the amount of time that clients remained in permanent housing and the number of days that clients spent incarcerated. To track the program’s progress toward meeting its goals, the nonprofit Urban Institute (UI) closely monitored the Denver SIB, which ultimately proved so successful that the city paid back its investors in full, plus $1 million.

A Difficult Cycle to Break

The city and its partners launched the Denver SIB because it faced a problem too serious and entrenched for the status quo social safety net to effectively address. In the mid-2010s, Denver had a disproportionately large population of individuals experiencing chronic homelessness, with a 2014 point-in-time survey estimating this population at 830. Because they lack appropriate accommodations, these individuals are frequently arrested for so-called homeless crimes such as trespassing, public intoxication, or public urination. In 2012, city officials in the Office of Behavioral Health Strategies estimated that approximately 250 chronically homeless individuals, cycling among the local jail, hospital emergency rooms, temporary shelters, and detox centers, required $7.3 million worth of public services in a single year. This situation strained the city’s criminal justice, medical, and emergency shelter systems and failed to effectively help those caught in the homelessness-jail cycle. Denver’s leaders recognized that this population required assistance that was more intensive and more effectively delivered than what was then available, but, no single city department had funds available to launch a new program, even though doing so could both alleviate suffering and save the city between $3 million and $15 million in emergency and crisis-services spending.

The solution was to arrange for Pay for Success (PFS) financing for a program of intensive supportive housing targeting this high-need, chronically homeless population. In the PFS model, investors fund the initial outlay for a government program, an agency is chosen to deliver the program’s services, a third-party evaluator tracks the agency’s work and determines whether it is meeting predetermined program goals, and, finally, the government pays the lender based on the performance of the service agency. By linking public spending to performance, PFS financing is intended to remove risk from the public sector by transferring the initial cost of social welfare spending to a private or philanthropic lender. In some cases, the cost of the suggested intervention can be at least partially recovered through savings in other areas, such as reduced healthcare or law enforcement spending, after the supportive or preventative program has been put in place. If an intervention is especially successful, investors may be not only repaid, but see a positive return on investment. Lenders can also set PFS financing terms that disburse portions of their payments to the service provider(s) responsible for executing the program if the providers meet certain metrics of success. This arrangement is intended to reward providers and programs that produce desirable outcomes and encourage service providers to experiment to find the best methods. At the federal level, HUD and the U.S. Department of Justice launched a similar joint Pay for Success Permanent Supportive Housing Demonstration in 2016.

Denver partnered with Enterprise Community Partners and the Corporation for Supportive Housing, which helped design the Denver SIB and would go on to manage it. UI monitored the initiative, with research assistance from the Evaluation Center at the University of Colorado Denver, and served as the third-party evaluator. Eight private and philanthropic investors contributed the initial $8.6 million capital investment. Two established local providers, the Colorado Coalition for the Homeless (CCH) and the Mental Health Center of Denver (MHCD), served as the housing and service providers. The Denver SIB launched in January 2016, expanded from its initial goal of serving only 250 clients in 2018, and ran until 2021.

Because the program was meant to serve people experiencing chronic homelessness and frequent arrests, eligible participants were individuals who had been arrested by the Denver Police Department (DPD) at least eight times over the previous 3 years, with at least three arrests marked “transient” — meaning that, at the time of arrest, the individual either had no home address or listed a homeless shelter as their address. From January 2016 to December 2017, DPD passed on the names of eligible individuals to MHCD and CCH. The service agencies assigned these individuals by lottery to either the Denver SIB or to regular community services to create a treatment group and a control group. By the end of 2017, DPD had referred 724 individuals, 363 of whom enrolled in the Denver SIB and 361 of whom were referred to community services as usual.

The service providers, CCH and MHCD, offered the treatment group housing in 210 permanent supportive housing units earmarked for use by the program — an offer made possible because the initial investor funding allowed the providers to secure additional housing resources, such as housing choice vouchers from the Denver Housing Authority and low-income housing tax credit equity. Implementing a Housing First model, the providers offered housing without any prerequisites or requirements related to sobriety, substance abuse counseling, or mental health treatment, allowing clients to enter housing and then decide whether to obtain services.

The available services were numerous and designed to address all the unmet needs that had led residents to repeated trips to Denver’s emergency rooms, detox centers, shelters, and jails. The Denver SIB provided clients with transportation assistance and referrals; access to an Assertive Community Treatment Team; access to integrated health services, including medical, dental, vision, and pharmacy care; assistance with acquiring and accessing benefits; help with accessing psychiatric services, including group and individual therapy and substance use treatment; nursing assistance; referrals to food resources; legal referrals and advocacy; and case management. Because of the initial millions invested, CCH and MHDC were able to obtain Medicaid reimbursements for services rendered over the course of the Denver SIB.

Measured by the time that clients remained in permanent housing and number of days that clients were incarcerated, the Denver SIB was a success. Of the 363 individuals in the treatment group, 334 attained housing at least 1 year before the initiative ended, and 86 percent of these individuals remained housed for at least the following year. After 2 years, 81 percent remained housed, and after 3 years, 77 percent remained housed. Although most participants completed the program, 129 left at some point. The most common reason for leaving the program was to serve a jail sentence of longer than 90 days; in addition, 38 participants died and 6 exited to enter other permanent housing. Although most of the participants who left the initiative did not return, 32 eventually reenrolled in the program. On average, individuals in the treatment group had 560 more days of consistent housing, with 40 percent less shelter use, than did individuals in the control group who received the usual services in the community. Denver SIB participants also spent 38 percent fewer days in jail than did members of the control group.

As a result of these successes, Denver made $4.5 million in housing stability payments and $5.1 million in jail day outcome payments to the investors. These main payments totaled $9.6 million, exceeding the $8.6 million initially invested and representing a $1 million return on investment for the eight investors. Ultimately, UI’s final evaluation of the Denver SIB found that the annual cost of services for an individual enrolled in the initiative was $6,876 less than the annual $25,554 cost of services for a person enrolled in the control group. More than half of these annual cost savings were enjoyed by the city and county of Denver, with the remaining sum benefiting the state of Colorado and the federal Medicaid program. These savings help offset the cost of providing services and demonstrate that robust supportive housing programs ultimately are less expensive than relying on shelters, emergency services, and the criminal justice system for addressing chronic homelessness.