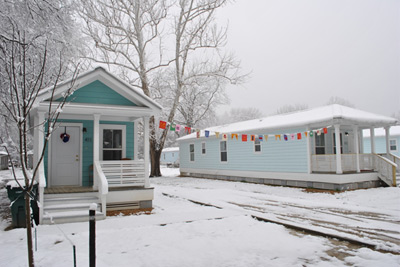 Ten of the first 11 cottages in Baptist Town were occupied as of early summer 2015. Credit: Richard Elliott

In the historic African American community of Baptist Town in Greenwood, Mississippi, 10 families recently realized the dream of homeownership with Baptist Town Cottages. The preassembled cottages were among the several thousand houses built for families in Mississippi and other Gulf Coast states displaced by Hurricane Katrina in 2005. Working with numerous local partners, the Greenwood/Leflore Fuller Center for Housing acquired the Baptist Town Cottages and sold them to families in 2014. The cottages are part of the Baptist Town neighborhood revitalization project, which includes new parks, streetscape improvements, job training, and a community center.

A Proud History, but Lingering Problems

Baptist Town has a rich history stretching back to the post-Civil War era. Residents maintain that their community was one of the first in the Mississippi Delta where freed slaves could own property. Seventy years later, famous blues singers Robert Johnson and David “Honeyboy” Edwards were drawn to the community, based on its reputation as a haven for aspiring musicians who wanted to escape working in the fields. During the 1960s, civil rights groups used Greenwood as a base of operations to reach African Americans in the Mississippi Delta between Memphis and Jackson.

Despite the efforts of civil rights leaders, the city of Greenwood continues to be highly segregated and experiences many of the ills associated with segregation. Fifty percent of the estimated 10,000 African American residents of Greenwood live below the federal poverty level. Cut off from the city’s downtown by railroad tracks and a bayou, the Baptist Town neighborhood needs new investment, particularly quality, affordable housing. Many of Baptist Town’s houses were built for sharecroppers and are now largely dilapidated. A Harvard University survey of 165 homes in Baptist Town found that 136 were substandard.

According to Emily Roush-Elliott, an architectural fellow at Enterprise Community Partners which manages the cottage project, the built environment often reinforces social and economic inequity instead of helping residents. One of the goals of the Baptist Town Cottages is to reverse some of that inequity by providing desperately needed affordable housing and helping residents build financial equity through homeownership. 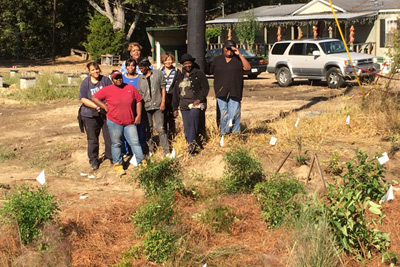 In 2014, the Greenwood/Leflore Fuller Center for Housing installed the first 11 of 26 cottages that the state had donated to Greenwood several years earlier. The Fuller Center selected families, all of whom were first-time homebuyers, based on need and ability to pay. Other partners on the project included the Greenwood-Leflore-Carroll Economic Development Foundation (GLCEDF), Mississippi State University’s Carl Small Town Center, and Enterprise Community Partners. The Carl Small Town Center was an early proponent of Baptist Town’s rejuvenation, having created a master plan for the community in 2001. That planning effort led to Greenwood hosting a participant in the Enterprise Rose Architectural Fellowship program, which places architects within development organizations to add value to projects through design.

The homebuyers were required to volunteer for service in the community or provide sweat equity to complete the cottages. Roush-Elliott and the Fuller Center worked with the future occupants to customize certain features of their homes, such as some architectural details, the color scheme, and the location of their cottage on the development site. The homes and their foundations are designed to withstand hurricane-force winds and have thick walls built with 2x6s instead of 2x4s. The cottages’ tight building envelope reduces heat transfer to help maintain a comfortable indoor temperature. As residents finish their first year in their new homes, the energy performance of the buildings will be compared with that of a typical affordable home in Greenwood.

The installation and finishing of the cottages were seen as a “joint investment in both the built environment and human capacity,” says Roush-Elliott, and were used to enhance the job readiness of some Baptist Town residents. Local residents received on-the-job training in carpentry and other building trades as they helped complete the cottages. For work that required technical specialties, the project hired local and minority contractors. Also, Ladies in the Landscaping, a program that helped train eight minority women in landscaping, completed an eco-friendly stormwater management garden.

The homes are affordable to households earning less than 30, 50, 60, or 70 percent of the area median income. The homeowners financed their cottages using no-interest, 15-year mortgages, with average monthly payments ranging from $132 to $159. Through grants from the Federal Home Loan Bank of Dallas, the homeowners received $4,000 in downpayment assistance. Enterprise Community Partners’ Gulf Coast office sponsored homebuying workshops for families that included information on maintaining a home and credit counseling.

The total cost of the project was approximately $600,000, including the $232,477 estimated value of the cottages donated by the Mississippi Emergency Management Agency. The Fuller Center invested more than $350,000 in the project, which included a $45,000 loan from GLCEDF and grants and donations from local foundations, businesses, and individuals.

The Work Still to be Done

The Baptist Town Cottages are part of the larger Baptist Town Neighborhood Investment (BTNI) project, a collaboration involving GLCEDF, the Fuller Center, and other local organizations. Partners in BTNI, with significant funding from the Walton Family Foundation, have invested in public spaces, improved the walkability and visibility of streetscapes, and built a park designed by local youth. These smaller projects helped build community trust and overcome residents’ concerns about redevelopment promoted by nonresidents, says Roush-Elliott. After those projects were completed, residents became very supportive, she says, and actively helped complete the cottages. Residents now manage Baptist Town Community Development, a nonprofit that oversees the Baptist Town Community Center (which offers educational programs and health and fitness training), the community garden, and Baptist Town Day, an event held annually in October. Resident engagement is crucial to the long-term success of the remaining redevelopment projects — most importantly, installing the 15 remaining cottages.