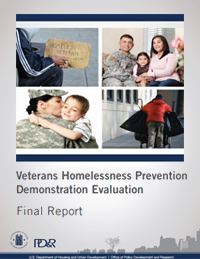 Returning veterans face a number of challenges, such as physical and mental health problems related to their service, difficulty finding and maintaining employment, and a greater risk of homelessness compared with their civilian counterparts. In 2009, Congress authorized the Veterans Homelessness Prevention Demonstration Program (VHPD), a 3-year program aimed at overcoming these challenges and improving housing and employment outcomes for veterans and their households. VHPD combined housing assistance from HUD, service coordination from the U.S. Department of Veterans Affairs (VA), and employment services from the U.S. Department of Labor (DOL). The program provided up to 18 months of housing assistance and case management and referrals to community-based services for veterans who were at risk of homelessness or had been homeless for less than 90 days. Housing assistance included help paying rent, security deposits, utilities, and moving costs. VHPD could also pay up to 6 months of back rent for clients. . VHPD sought to achieve housing stability by increasing participants’ income. Employment services were provided by staff of the DOL’s Disabled Veterans’ Outreach Program and Local Veterans’ Employment Representatives.

The HUD-sponsored evaluation of VHPD consisted of two main parts: a process study of program design and implementation, and an outcomes study primarily concerned with housing status and employment. For the process study, researchers examined the program setup at each site, interviewed staff and community stakeholders, and held focus groups with program participants during two waves of site visits to the five locations. The findings of this portion of the evaluation, which addressed research questions such as how to identify veterans at risk for homelessness, are discussed in the study’s interim report. For the outcomes study, the researchers recruited 509 study participants. Of that group, 424 completed a baseline survey taken as soon as possible after program entry, and 315 of those respondents completed a followup survey 6 months after exiting the program. In addition, the researchers analyzed administrative data from the Homeless Management Information Systems and the VA for a larger group of VHPD clients. The main questions of the outcomes study concerned the effectiveness of the program in improving housing and employment outcomes and in reaching its targeted populations. The study also examined differences in serving veterans and their families compared with nonveterans.

The researchers report generally positive outcomes from VHPD in both housing and employment. The absence of a comparison group limits the researchers’ ability to fully attribute the results to the intervention. Although the researchers identified a comparison group of veterans outside of the program, the data on that group was incomplete and could not be compared directly with data on VHPD clients. Despite this limitation, the evidence suggests that the program helped participants. The researchers conclude that a significant need exists for veteran-specific homelessness prevention programs and that program components designed to meet the particular needs of veterans contributed to the success of VHPD — important findings for policymakers and providers to consider as they work to end veteran homelessness in 2016.