Using Public Land to Defray the Cost of Affordable Housing 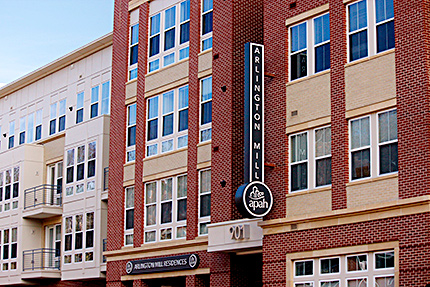 An exterior photo of the Arlington Mill Residences. Image courtesy of the Urban Land Institute.


Cities across the country are struggling to meet their residents’ demand for rental housing. The result: rapidly rising rents that often make housing unaffordable for low- and middle-income families. This pressing issue is spurring mayors, housing commissioners, and their respective local governments to examine various policies and strategies to improve housing affordability in high-cost metropolitan areas.

Earlier this year, the National Housing Conference’s Center for Housing Policy, in conjunction with the Washington, DC district council of the Urban Land Institute (ULI Washington), released a report analyzing one strategy that could create a larger supply of affordable housing in the Washington DC region— where, according to Zumper, a national rental search site, the median rent for a one-bedroom apartment is $2,150, the fifth-highest in the nation. Specifically, the report examines how the District and other municipalities can work with developers to create affordable housing by using the value of public land to subsidize new housing.

The process of financing, developing, and constructing affordable housing can be long, arduous, and expensive. The cost of land makes up a large percentage of total development costs; by partnering with developers to utilize the value of public land in their financial strategy, the development of mixed-income and affordable homes is more financially feasible. By developing a partnership to keep rents affordable while still covering construction and operating costs, the use of public land for affordable housing can provide low- and middle-income families with access to decent, safe, and affordable homes.

Municipalities need to be strategic in their assessments of land to ensure that any potential housing development will offer the maximum benefit for residents and taxpayers. Mainly, policymakers should identify publicly owned sites — whether vacant lots or underutilized developments — in high-value, accessible areas that can be used for housing developments. Proximity to transit or other amenities is especially important. As the report states, building mixed-income housing in high-value areas near amenities offers “the greatest potential for subsidizing more affordable homes through greater returns on market-rate units,” thus reducing the amount of taxpayer subsidies needed to build affordable housing. In addition to making policy recommendations, the report presents an analysis of land costs and reviews case studies in the Washington, DC metropolitan region to examine the financing and process of building of affordable housing using public land as an element of the total financing package.

The policy strategies in this report can also be implemented in other high-cost cities throughout the nation. Policymakers in Boston, for example, have introduced legislation that would allow the state to sell public lands along its rapid transit lines at a discount to developers who agree to build affordable housing. In San Francisco, Mayor Ed Lee has begun a program called Public Land for Housing that will review the city’s portfolio of public sites for possible redevelopment as housing to expand the city’s affordable housing stock, increase the use of public transportation, and promote neighborhood sustainability.