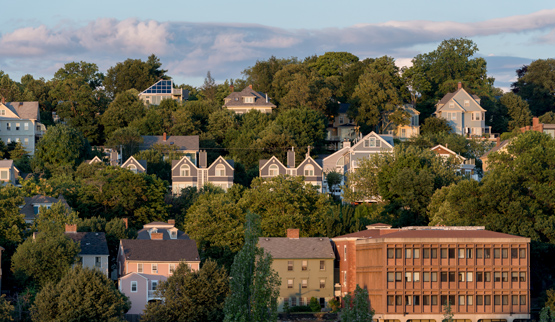 Rhode Island’s housing affordability crisis long predates the onset of the COVID-19 pandemic in 2020 and its associated strains on the housing market, in part because of an issue particular to the state: limited developable land. Rhode Island is the smallest U.S. state with only 1,045 square miles of land, much of which is ecologically sensitive or protected. Conscious of this constraint and the likelihood that the state’s housing crisis would continue to worsen, Rhode Island’s legislature passed the Low and Moderate Income Housing Act (LMIHA) in 1991. The law, which has been revised repeatedly, requires local governments to provide their fair share of affordable housing, either 15 percent of the occupied year-round rental units or 10 percent of the year-round units, depending on the size of the municipality. Where the affordable housing supply is below the standard, LMIHA allows developers applying to build low- and moderate-income housing to seek a comprehensive permit through the local review board, which offers a streamlined approval process and bypasses certain local land use regulations. If the local review board denies the application, developers may appeal the decision through the state’s Housing Appeals Board.

In 2021, only six municipalities met their obligations under the act, and many localities seemed to disregard the affordability benchmark. In February 2021, the state legislature created a 17-member special legislative commission to investigate why more communities had not met their LMIHA obligations and recommend legislative reforms to increase the supply of affordable housing. The commission reported its 12 recommendations to the state legislature in February 2022, and state lawmakers passed a package of 10 housing bills based in part on those recommendations later that year.

One of the bills, House Bill 7949 Substitute A as amended (HB7949 SubAaa), makes several changes to LMIHA. LMIHA’s comprehensive permit process was intended to save time and simplify reviews; however, localities often used the system of appeals associated with comprehensive permitting to incur delays and costs on unwanted developments. To remedy this unintended use of the appeals process, the commission proposed to further streamline the process, and HB7949 SubAaa incorporates the commission’s recommendation.

HB7949 SubAaa reforms the comprehensive permitting process by changing the conditions required for the initial application review. The bill reduces the time in which a local board can determine the completeness of an application and approve or deny the proposed development. The bill also requires a majority vote of only present members rather than the full board membership to decide whether to approve a comprehensive permit. In addition, the bill retains the LMIHA’s conditions that must exist for a review board to deny an application and includes a new crucial condition for rejection: a board must also find that the locality is making “substantial progress” toward its affordable housing obligations.

Click here to access the text of HB7949 SubAaa and how it addresses regulatory barriers in the Low and Moderate Income Housing Act. Find more plans, regulations, and research that state and local governments can use to reduce impediments to affordable housing at HUD USER’s Regulatory Barriers Clearinghouse.