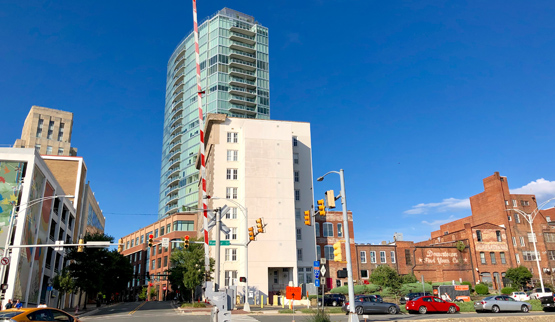 Over the past several decades, the city and county of Durham, North Carolina, have experienced sustained and significant population growth driven by a strong regional economy anchored by medical, biotechnical, and educational institutions. Since the 1970s, much of this growth has been accommodated by converting farms and forests into suburban housing, offices, and commercial space. As Durham grew, however, planners noted the increasing cost of area housing and worried about the displacement of historically marginalized communities. According to Scott Whiteman, policy and urban design manager for the Durham City-County Planning Department, Durham is expanding its approach to upzoning across the county to maximize opportunities for equitable infill development, which will increase the diversity of housing types, speed the development of new housing, and lay the groundwork for long-term equity.

With Durham’s population expected to increase by 160,000 by 2045, policymakers are prioritizing efforts to preserve and enhance opportunities for all Durham residents to live affordably in the area. In 2019, the Durham City Council and Durham Board of County Commissioners approved the Enhancing Housing Choices (EHC) amendment to the Unified Development Ordinance, the city and county’s combined subdivision and zoning code. EHC promotes densification and infill development by allowing the construction of duplexes, townhouses, and small multifamily buildings in lower-density suburban and urban residential zoning districts. In addition, the amendment reduces restrictions on accessory dwelling units and creates a mechanism for subdividing large lots. EHC also revises other standards for simplicity and clarity.

EHC enables higher levels of housing production while diversifying the types of housing in restrictively zoned areas of Durham. The premise of the amendment is that building more housing can ameliorate housing cost increases. With a greater supply of housing to absorb the influx of higher-income workers and the availability of more housing types to better match the area’s demographics, EHC can help stem the displacement of vulnerable households. In some cases, synergies exist between EHC and current policy, such as Durham’s affordable housing density bonus. EHC works in concert with the bonus to indirectly produce more affordable housing by increasing the number of units allowed on a given amount of land.

EHC requires the planning department to regularly report the effects of the amendment. As of the April 2021 report, developers submitted 104 projects made possible by EHC to the planning department for approval. Durham has seen a notable number of permit submissions for ADUs and lot splits, and duplex construction has been picking up, says Whiteman. By 2024, the planning department hopes to see 140 new EHC-enabled units per year in the city’s urban core. The department is also tracking teardowns to determine how often residences are replaced with EHC-enabled housing types. The first quarter of 2021 saw the highest levels to date of EHC-enabled permitting, which Whiteman expects will accelerate as developers gain familiarity with EHC. Monitoring outcomes will help Durham officials adapt EHC to further the amendment’s goals.

Whiteman acknowledges that challenges exist in isolating the effect of EHC on new housing development. For example, Whiteman notes that data collected at the census-tract level may not be sufficiently fine-grained to reveal neighborhood-level effects. The planning department is collaborating with researchers at the University of North Carolina’s Center for Community Capital to develop new metrics to overcome these challenges.

Click here to access the city ordinance adopting the EHC amendment and information about how the plan addresses regulatory barriers. Find more plans, regulations, and research that state and local governments can use to reduce impediments to affordable housing on HUD User's Regulatory Barriers Clearinghouse.